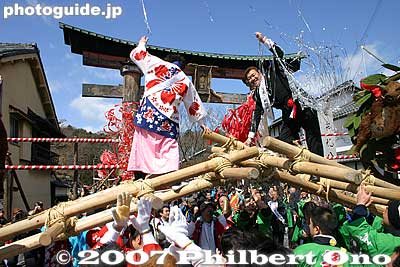 One of Shiga’s must-see festivals. The annual Sagicho Matsuri is a dramatic parade and clashing of 13 colorful Sagicho floats carried around the old streets of the city and in Himure Hachimangu Shrine near Hachiman-bori Canal. On the first day (Sat.), the floats are paraded along the streets near the shrine and undergo judging for best design. The floats are works of art with a motif based on the year’s Oriental zodiac. Since it is the Year of the Horse, be prepared to see all kinds of dramatic horses on the floats. What’s incredible is that the float decorations are all made of edible materials mounted on a straw and wood base. The floats are thus different every year. 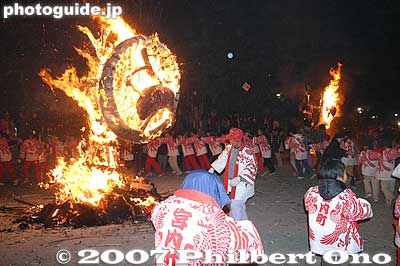 The second day (Sun.) of the Sagicho Festival is the climax. During the day, the Sagicho floats collide with each other and try to topple each other. Then at night, the floats are set afire. Sagicho is actually a fire festival. If you plan to see it at night, be sure to dress warmly. It can get quite cold.

Here’s a rough schedule of events at the Sagicho Festival this year (official festival site here):

This pdf shows the floats’ procession route. Also see more photos and my video on YouTube. 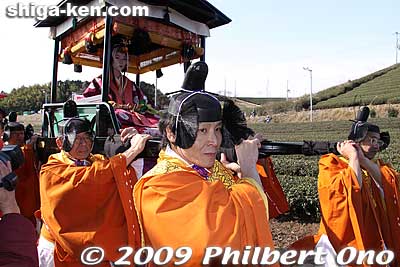 If you like kimono, you gotta see this festival. It’s a small, but very elegant and colorful matsuri in Koka’s Tsuchiyama area. The Saio princess dressed in a beautiful, juni-hitoe, 12-layer kimono will be carried in a palanquin escorted by a bevy of women in kimono. They also dance along the procession route (map below). This is actually an extension of Kyoto’s famous Aoi Matsuri.

The Saio princess was an unmarried, young Imperial princess, often the Emperor’s daughter, who was appointed (by divination) to be the High Priestess of Ise Grand Shrines in Mie Prefecture from the 7th to 14th centuries. For about 660 years, over 60 Saio princesses served at Ise Grand Shrines. The new Saio princess traveled from Kyoto to her Saiku palace near the Ise Shrine. The journey took 5 nights and 6 days, and passed through Tsuchiyama in Shiga Prefecture. Held on the last Sunday in March, this festival reenacts the Saio Gunko procession in Tsuchiyama to Tarumi Tongu which was one of the five palaces where the Saio lodged along the way. The Saio princess is selected among volunteer women from Koka. 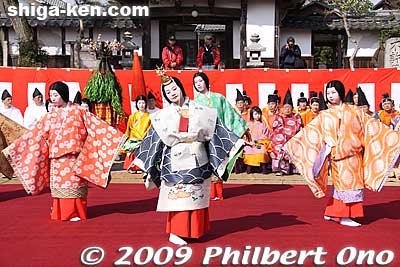 The festival starts at 11:30 am with the Saio princess carried on a palanquin arriving at a small park called Yume no Ogawa next to Ono Elementary School. She purifies herself at a small stream in the park. Then they gather inside the school gym for the Departure ceremony.

The procession will depart the school at 1:30 pm and proceed on foot on the old Tokaido Road to Tarumi Tongu (垂水頓宮). Tongu means temporary palace. There were five of them for the Saio princess between Kyoto and the Saiku palace in Ise. The one in Tsuchyama is a National Historic Site, although nothing remains of the palace. From 886 to 1264 (378 years), a total of 31 Saio princesses lodged at Tarumi Tongu.

The procession will stop and dance at 2 pm at Ichiba Kumin Hiroba square (市場区民広場) and at 2:40 pm at Maeno Community West Hiroba Square (前野集会所西広場). Great photo ops at these two stops. The procession will arrive Tarumi Tongu at 3:40 pm where a short ceremony will be held. The festival ends at 4 pm. YouTube video | Official Website

Getting there: Take the “Aikuru” bus from Kibukawa Station (JR Kusatsu Line and Ohmi Railways). In about 30 min., get off at Ono Higashi-guchi (大野東口) and walk to Ono Primary School nearby. Buses leave at 10:05 am, 11 am, and 12:05 pm. Bus schedule in Japanese here.

*In the case of rain, the festival will be held inside the school gym.

Map of the procession route.

View あいの土山斎王群行 in a larger map