Hisashi-buri I went to Kinomoto. They have a nice, spanking-new train station which opened at the same time as Nagahama’s station in Oct. 2006. I was impressed by Jizo-in temple. Very interesting. You’ll love it if you like frogs. Kinomoto is also where Yamauchi Kazutoyo bought his famous horse with his wife’s money. There were signs for it. Google Map Pictures: https://photoguide.jp/pix/index.php?cat=172

END_OF_DOCUMENT_TOKEN_TO_BE_REPLACED 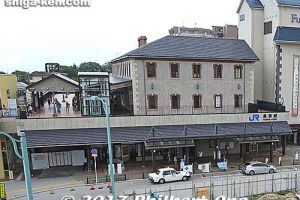 END_OF_DOCUMENT_TOKEN_TO_BE_REPLACED

Is everyone watching “Komyo ga Tsuji,” NHK’s Taiga Drama? I’m watching and enjoying it, but sometimes I miss a few episodes. When I miss an episode, I read the synopsis in English here so I can find out what happened: http://wiki.d-addicts.com/Koumyou_ga_TsujiThis show has helped me understand a little more about Shiga’s history. I cannot understand everything they say, but it’s interesting. People overseas are lucky because they can watch the show with English subtitles. I liked Tachi Hiroshi as Nobunaga. Nakama Yukie is also good, but I wish a Shiga actress played Chiyo. Yukie is from Okinawa. Karasuma Setsuko is

END_OF_DOCUMENT_TOKEN_TO_BE_REPLACED

Uh-oh, looks like Shiga will have another big debate, probably bigger than the shinkansen station in Ritto. On Sept. 20, 2006, the mayor of Yogo-cho town again told the town assembly that he wants to accept highly radioactive nuclear waste for final disposal in Yogo. He said that it was important for Japan to find such a place. The large amount of money the town would receive for studies conducted for the disposal site would greatly help the cash-strapped town which forecasts a lot of red ink in the coming years. Shiga Governor Kada Yukiko is opposed to the plan,

END_OF_DOCUMENT_TOKEN_TO_BE_REPLACED

I just found an interesting article in English about a 27-year-old woman who has taken over a large farm in Kohoku-cho. Her name is Tanaka Sayuri and her farm is Kizu Noen. The article is here: http://www.stella-web.jp/en/interview/tanaka01.html (link broken) There will be Part 2 of the interview later.I also found a Japanese version: http://www.nca.or.jp/shinbun/20060825/agri060825.html Her blog: http://yanmar-sayurifarm.com/ (link broken) 田中小有里 木津農園