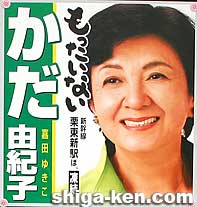 February 17, 2006: Two kindergarten children, a boy and a girl, are stabbed to death numerous times in Nagahama by a 34-year-old Chinese housewife, Zheng Yongshan (鄭永善) (Japanese name Taniguchi Mie), as she was driving them (and her own 5-year-old daughter who was unhurt) to a kindergarten (神照幼稚園). She threw both bodies out of the car near the road. The shocking murder grabbed national headlines. She was arrested the same day and received a sentence of life imprisonment upheld by the Osaka High Court in Feb. 2009.

July 2, 2006: Shiga elects a new governor and its first woman governor in Kada Yukiko （嘉田由紀子）who ran on a campaign slogan called “Mottainai” (It’s wasteful) in reference to the proposed construction of a new shinkansen bullet train station in Ritto, Shiga. Born in 1950, she is Japan’s fifth woman governor, beating two-term incumbent Kunimatsu Yoshitsugu （国松善次）against all odds as an independent candidate.

Sept. 20, 2006: The mayor of Yogo-cho town, Hatano Sakuro (畑野 佐久郎), again announces that he wants to accept highly radioactive nuclear waste for final disposal in Yogo. (No other municipality in Japan has agreed to accept the nuclear waste.) The large amount of money the town would receive for studies conducted for the disposal site would greatly help the cash-strapped town which forecasts a lot of red ink in the coming years. Shiga Governor Kada Yukiko is opposed to the plan, saying that a nuclear waste dump near Lake Biwa which supplies water to 14 million people in the Kinki region would cause too much anxiety among the population.

Oct. 21, 2006: The Hokuriku Main Line switches to direct-current electrification between Nagahama Station and Tsuruga Station (Fukui), enabling faster shin-kaisoku trains to reach these train stations (Torahime, Kawake, Takatsuki, Kinomoto, Yogo, Omi-Shiotsu Stations) directly from Kyoto. Before the switch, passengers had to transfer trains at Nagahama Station to go beyond Nagahama. Anticipating a substantial increase in visitors, a new train station building was built at Nagahama, Torahime, Takatsuki, and Kinomoto. However, by March 2008, the passenger increase was only 0.5 percent, far below the target 14% increase.