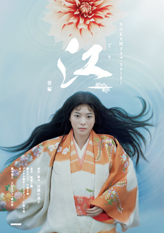 This is to help you better understand the historical background of Go–Himetachi no Sengoku (江〜姫たちの戦国〜) which I translate as “Go–Noble Ladies of Feudal Japan.” The TV series will be broadcast on NHK Sogo TV from Jan. 9 to Nov. 27, 2011 every Sunday at 8 pm to 8:45 pm (except Jan. 9 when it will be broadcast from 8 pm to 9:15 pm) and rebroadcast on the following Sat. at 1:05 pm.

What is Go–Himetachi no Sengoku?
It is NHK TV’s year-long, historical drama TV series to be broadcast weekly in 2011 from Jan. 9 to Nov. 27, 2011 in Japan. This annual TV series is called NHK Taiga Drama which goes back 50 years to 1963. It is one of Japan’s most famous and popular TV series. Each year, a different Japanese historical theme is portrayed, most often based on Japan’s feudal period.

Go is the name of the main character, a daughter of a prominent samurai daimyo, Azai Nagamasa, who ruled northern Shiga Prefecture in the 16th century. Himetachi means princesses or noble ladies. And sengoku literally means warring states, in reference to Japan’s feudal period when civil wars were waged by samurai trying to conquer more territory and ultimately unify and rule all of Japan. Thus, the story focuses on Go as well as other ladies of that period who went through many ordeals during a most turbulent period of Japan’s history.

According to NHK, the story will mainly center on the love and bond between Go and her parents, her husbands, her sisters, and her children.

Who was Go?
Go (1573-1626), also called Ogo or Oeyo and Sugen’in in her final years, was the youngest of three sisters born to Azai Nagamasa (1545-1573), Lord of Odani Castle in northern Shiga (present-day Nagahama) and wife Oichi (1547?-1583) who was the younger sister of Oda Nobunaga (1534-1582). Born in Shiga’s Odani Castle, the three Azai sisters, called Azai sanshimai (浅井三姉妹), are perhaps Japan’s most famous or historical trio of sisters. Her oldest sister was Chacha also known as Yodo who at age 19 married Toyotomi Hideyoshi who was 51, and her other sister was Ohatsu who married Kyogoku Takatsugu.

Of the three sisters, Go has become the main character because she became part of a lasting dynasty in Japanese history by marrying the second Tokugawa Shogun Hidetada (1579-1632) and giving birth to the third Tokugawa Shogun Iemitsu (1604-1651). We can say that most of the Tokugawa shoguns have roots in Shiga since Go was born in Odani, Shiga.

With Hidetada, Go also had a daughter named Senhime (1597-1666) who married cousin Toyotomi Hideyori (son of Chacha and Toyotomi Hideyoshi) at age 6 and another daughter, Masako (1607-1678) who married Emperor Go-Mizunoo (1596-1680). Masako’s daughter became Empress Meisho (1624-1696). The Empress was not allowed to marry so she had no children. She was succeeded by her half-brother who had a different mother.

Thus, Go had Oda Nobunaga as an uncle, Toyotomi Hideyoshi as an adoptive guardian and father-in-law to a daughter, Tokugawa Ieyasu (the first Tokugawa shogun who unified Japan in 1600) as a father-in-law, a son who became the third Tokugawa shogun, and a granddaughter who became a reigning Empress of Japan. She lived through Japan’s turbulent transition from never-ending civil wars to a period of relative peace. Such blood connections to three of Japan’s most famous samurai and even to the Imperial Court makes her one of the most well-connected women in Japanese history. Great fodder for a year-long TV series, novels, comic books, etc.

One major storyline would also center on the siege of Osaka Castle in 1614-15 when Yodo (Chacha) and her son Hideyori residing in the castle were attacked by Tokugawa Hidetada and forced to kill themselves to extinguish the Toyotomi family. Sisters Yodo and Go were on opposing sides, and Ohatsu acted as an intermediary for a truce which was later broken by the Tokugawa.

Go was married three times, but her third marriage to Hidetada was the most significant. She also had other children (2 sons and 5 daughters total) like Tokugawa Tadanaga. But other than Iemitsu, Senhime, and Matsu-hime (Masako), they are pretty obscure. Go died at age 53 and is buried at Zojoji temple in Tokyo where many Tokugawa shoguns are buried.