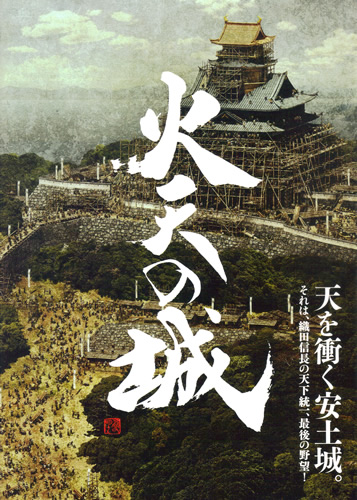 Released in Japan on Sept. 12, 2009, this movie is about Okabe Mataemon, a Nagoya (Atsuta)-based master carpenter who in 1576 was ordered by Japan’s leading warlord Oda Nobunaga to build Azuchi Castle on Mt. Azuchi fronting Lake Biwa. The main castle tower or donjon was to have an unprecedented five stories. It was to be the grandest and most lavish castle Japan had ever seen. Mataemon and his crew had only three years to complete the epic construction which they did. The movie shows the major and minor tribulations Mataemon and his crew went through during the construction. The movie is also unusual because it has no battle scenes despite being a samurai movie.

Being a castle fan, I really looked forward to this movie. However, I was somewhat disappointed with the quality of the acting, completeness of the story, believability, and overall visual and emotional impact. The movie does have a few outstanding scenes with what looks like thousands of people working, but they were too few and too short. Computer graphics depicting the construction of the mountaintop castle were impressive enough. But I thought there were too many story lines and characters which could not be fully developed or explained within the movie’s 139 min.

For history buffs, it might be frustrating because the movie is obviously not historically accurate since it is a work of fiction. For castle fans, the movie does not show all the major aspects of building a castle. I wish they showed more scenes of the actual construction (which sped by too quickly). Work on the stone walls, interior, moats, etc., are missing. Seeing the stones being cut and fitted onto the walls, the beams being fitted to the main pillar, the construction of the roof, moat digging, interior painting, gold leafing, etc., are all missing. So the educational value of this movie does not attain its potential.

The movie does have interesting story lines. Construction of a major castle with mostly manual labor, Mataemon the carpenter prodigy, Nobunaga’s affection for imported European goods, merchants getting rich from European trade, ninja-like assassins, and a few love stories. But the movie was too short to adequately develop them all. It tries to cover everything, but in doing so, it never really developed any story to its fullest and best potential. It might have been better to make it a TV series rather than a movie.

I was also disappointed that Governor Kada Yukiko did not make a cameo appearance. I had heard that leading actor Nishida Toshiyuki asked her to appear in the movie. I thought she agreed. Well, you won’t see her in the movie. The movie also does not mention the word “Omi” or “Shiga.” And it does not introduce any places, people, or products from Shiga. Also, none of the main actors/actresses are from Shiga.

But I still recommend seeing this movie. It is worth seeing the few outstanding scenes that it has. The movie was filmed in Kyoto; Adogawa in Takashima where they filmed the giant boulder scene with 200 extras, Awajishima island in Hyogo for scenes atop Mt. Azuchi overlooking Lake Biwa, Kiso-Fukushima in Nagano for forest scenes, and Taiwan for the big tree scene.

It is pretty much an all-star cast headed by Nishida Toshiyuki as Mataemon, Otake Shinobu as his wife, and Ogata Naoto (who gave a fine acting performance) as a woodsman.

I have posted a detailed review and detailed summary of the movie plot for those of you who cannot understand Japanese, so you’ll know what’s going on:

In Shiga, the movie is playing at the following theaters (phone number in parentheses):