Here are some recommended autumn/fall events and festivals in Shiga in September 2014.

Link for video above: http://youtu.be/61q1TvodzOs

September 6, 2014
♦ Nagahama-Azai Appare Matsuri, Nagahama, 9 am – 9:00 pm
A big yosakoi dance contest and festival with about 30 teams from Shiga and elsewhere. See over 1,000 dancers performing at Azai Bunka Sports Park (浅井文化スポーツ公園). The teams will dance in the morning on two stages. Sem-finalists will dance at 1:20 pm, and the finalists will dance at 7 pm. In between, there will be other performances and activities like flag waving, mochi throwing, and singers. It will end with fireworks at 8:40 pm. In case of bad weather, will be postponed to the next day. Shuttle buses will be provided only from the Azai Branch of Nagahama City Hall (no buses from Nagahama Station). Map
長浜あざいあっぱれ祭り
http://www.appare-matsuri.com/
http://kitabiwako.jp/event/event_3651/?area=nagahama

September 6-21, 2014
♦ Genkyuen Garden Insect Chirping Concert, Hikone, 6:30 pm – 9:00 pm (enter by 8:30 pm)
Genkyuen Garden next to Hikone Castle will be open in the evenings in September. If you miss the cicadas in summer, you can still hear insects chirping in the garden that will be lit up along with Hikone Castle in the background. Matcha tea will be served at cost and free gagaku and koto performances will be held on the weekends. Admission ¥500. Near JR Hikone Station. Map
玄宮園で虫の音を聞く会
http://www.hikoneshi.com/jp/event/articles/c/mushinone

September 6-8, 2014
♦ Ishiyama-dera Temple Autumn Moon Viewing, Otsu, 6:00 pm – 9:00 pm
The temple grounds will be adorned with about 2,000 lanterns while the huge Ishiyama rock and National Treasure Tahoto Pagoda will be lit up. The temple also has a Moon-Viewing Pavilion. The Hondo main hall will also have stage performances. The event coincides with the Harvest Moon. The autumn moon over Ishiyama-dera was made famous by woodblock prints by Hiroshige. Admission ¥500. Near JR Ishiyama Station. Map
石山寺 秋月祭
http://www.ishiyamadera.or.jp/ishiyamadera/gyouji/shugetsusai/index.html 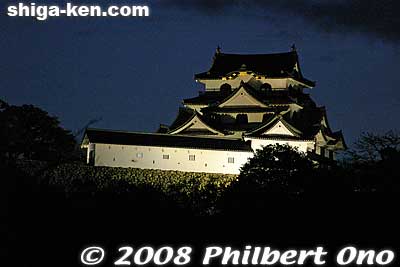 September 13 to November 9, 2014 (closed Thursdays)
♦ BIWAKO Biennale 2014, Omi-Hachiman, 10:00 am – 5:00 pm
Held for the 6th time, the BIWAKO Biennale showcases the work of about 60 artists in Omi-Hachiman’s traditional townscape area. Art exhibitions will be in former merchant homes, traditional houses, and a sake factory. A blend of modern art and traditional Japanese buildings. Workshops for kids by the artists, and concerts in various places. Advance tickets ¥1,800 (available at Lawson) or ¥2,000 at the door.
BIWAKOビエンナーレ
http://energyfield.org/biwakobiennale/page/english 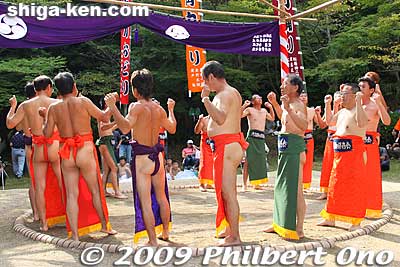 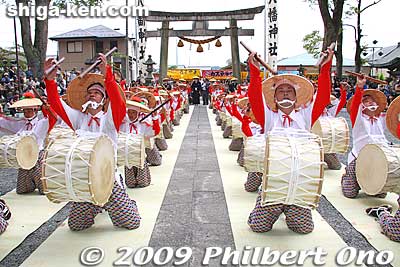 September 23, 2014
♦ Buratto Gokasho Town Walk, Gokasho, Higashi-Omi, all day
Some 100 people dressed as Omi-shonin merchants will parade along central Gokasho at 1 pm. A number of festivities and entertainment will be held from the morning, A few Omi merchant homes normally closed to the public will also be open and temple and shrine treasures will be displayed in Gokasho. Gokasho is famous for the grand, old homes of wealthy Omi merchants who traveled all over Japan selling cloth, lacquerware, medicines, etc. Near Ohmi Railways Gokasho Station. Map
ぶらっと五個荘まちあるき
http://guide.jr-odekake.net/event/14913 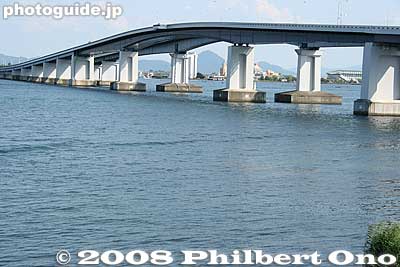 September 28, 2014
♦ Biwako Ohashi Bridge 50th Anniversary Event, Moriyama and Otsu, 9:30 am –
The great Biwako Ohashi Bridge crossing the neck of Lake Biwa’s panhandle between Moriyama and Katata (Otsu) opened 50 years ago on this day. 1964 was also when the shinkansen “bullet train” started running and when the Tokyo Olympics were held. To celebrate, they will block part of the bridge to vehicular traffic and allow pedestrians on the bridge to release balloons (I hope they won’t be harmful to the environment), form a human chain, and do radio taiso exercises. Fishing boat and lake cruises will also depart from Pieri Moriyama (defunct shopping mall) and from the Biwako Ohashi Kome Plaza Michinoeki market in Katata. Map
琵琶湖大橋「開通50周年」記念イベント
http://www.moriyamayamamori.jp/biwako50