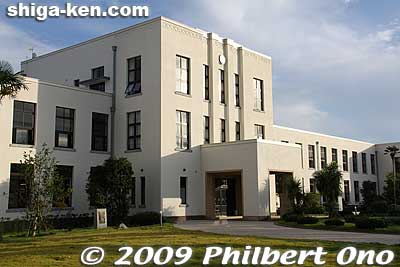 Renovation of the old Toyosato Elementary School (豊郷小学校), housed in a building designed by William Merrell Vories in 1937, has been completed and a ceremony was held on May 30, 2009 to mark its completion.

At a total cost of 650 million yen, the old building was repainted, reinforced against earthquakes, installed with an elevator, and preserved as much as possible.

The three-story building’s first floor has a public library and small play area for infants. The second floor with classrooms is preserved as it was originally. The old library next to the main building will be used a gallery.

During 1999-2002, Toyosato gained national attention when this old elementary school building was going to be torn down by the mayor in opposition to activists who wanted to preserve the building.

See my photos of the renovated school. | Google Map