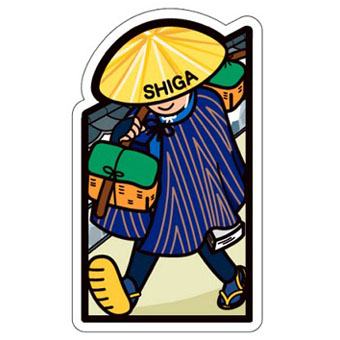 If you’ve been to a post office in Shiga, you probably noticed those unique-shaped, die-cut postcards featuring one of Shiga’s symbols like the Shigaraki tanuki raccoon dog, Hikone Castle, and an Omi shonin merchant. The Japan Post Office has been issuing these charming postcards since 2009. One die-cut postcard per year has been issued for each prefecture. So each prefecture now has three die-cut postcards. Shiga’s die-cut cards issued so far are shown here. In Japanese, they call it gotochi form cards (ご当地フォルムカード).

Each prefecture’s die-cut cards are sold only in that prefecture’s post offices. Each card costs 180 yen and requires a 120 yen stamp for domestic mail. Some cards have sold out, but they will be reissued soon.

If you are a postcard collector like me, you may wonder what the other die-cut postcards in other prefectures look like. Well, there is a Web site where you can see the postcard designs for each prefecture. Just click on a prefecture to see the three cards so far. You can then see the prefecture’s unique symbols and attractions: http://postacollect.com/gotochi/index.html