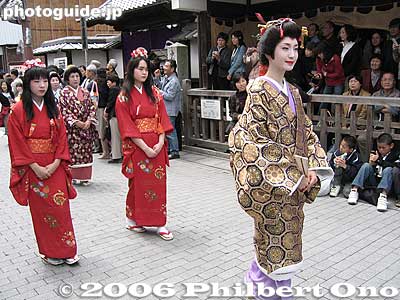 The Kusatsu Shukuba Matsuri Festival is canceled for 2011.

Many festivals (matsuri) in Japan are being canceled or scaled back in consideration of the Tohoku disaster. It’s unfortunate since spring is prime time for festivals.

The Kusatsu Shukuba Matsuri festival scheduled for April 23-24, 2011 has been canceled. It’s too bad since it’s a nice festival highlighted by a parade of women in kimono and men in samurai costume.

I hope cancellation of matsuri will be minimal. Of course, we all feel sad about what happened in Tohoku, but cancelling these events where we can get together and relieve stress makes it more demoralizing and somber. Look at the TV stations, they continue to broadcast comedy shows.

Omi-Hachiman’s Sagicho Matsuri was held as scheduled in March even after the Tohoku disaster, albeit with less revelry. For those who had worked meticulously for months on their sagicho floats, cancelling the festival would make it a great waste.