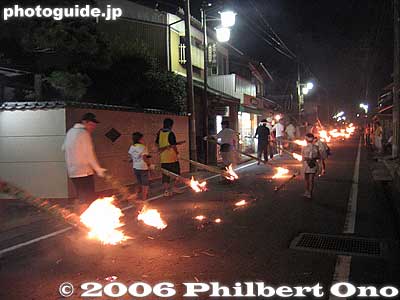 Japan has re-entered the age of nuclear power, starting with Shiga’s backyard. Despite widespread opposition, the Japanese government has given the green light to restart the Oi nuclear power plants in neighboring Fukui Prefecture, Japan’s mecca of nuclear power plants. On July 1, 2012, they began firing up two Oi nuclear power plants amid protests near the power plant and many thousands of protestors in front of the Prime Minister’s residence in Tokyo. The protesters have received relatively little Japanese media attention. It’s no wonder because many news media executives (including NHK) also serve (or served) in executive positions at the power companies. The power companies have a lock on both the government and news media. It’s been a cozy relationship since decades ago. Prime Minister Noda and other Cabinet ministers are also mum on their reaction to the protesters, as if the protesters didn’t exist.

The media in Kansai is instead giving much attention to the possibility of rolling blackouts (called keikaku teiden 計画停電) and how they can affect businesses and how the police are preparing to deal with powerless traffic signals. I guess it’s a ploy to make us feel better about the Oi restart.

Although the weatherman is predicting an average, hot summer, we’re all hoping for a cool summer to minimize air-conditioning. The name of the game this summer is Power Conservation. From July to early Sept., the Kansai Region is being asked to save power by 15% or by 10% after the Oi nuclear power plants reach full output later this month.

Shiga Prefecture is encouraging residents to get out of their homes (and turn off the air-conditioning) by offering free admission to its prefectural cultural facilities on weekdays from July 23 to Aug. 31. Visit The Museum of Modern Art, Shiga; Lake Biwa Museum; Samegai Trout Farm;  Azuchi Castle Archaeological Museum; and Shigaraki Ceramic Park for free. To enter for free, you have to show a printout of a flyer that will appear on this page. Or show a copy of the Shiga Plus One newsletter (July-Aug. issue 滋賀プラスワン 7・8月号). The free admission is apparently directed toward Shiga residents and not tourists. But they won’t be checking whether you’re a resident or not, so take advantage of this if you haven’t been to any of these worthwhile places whether you’re a Shiga resident or not.

Shiga receives electric power from Kansai Electric Power Co. (KEPCO) which depended on nuclear power generation for almost half of its power generation before the Fukushima nuclear disaster on March 11, 2011. KEPCO’s dependence on nuclear power was the highest in Japan compared to other power companies. Thus, the shutdown of all its nuclear power plants in neighboring Fukui Prefecture dealt KEPCO the most serious shortfall in power.

Although Shiga Governor Yukiko Kada and the governors of Kyoto and Osaka voiced their initial opposition to the restart, they had little choice but to go along with Prime Minister Noda’s decision in the end. All that back-and-forth talk about the central government trying to gain the consent of local residents before any nuclear restart was just a smokescreen for a final decision that had been made long before.

What’s gonna happen if there’s another nuclear accident? What will happen to nearby Lake Biwa which supplies water to millions in the Kansai Region? How and where can residents evacuate in case of a nuclear accident? These and many other questions have been left unanswered. An expert pointed out that Oi’s large power generator trucks, which supposed to serve as a backup power source for the plant’s cooling systems, are parked right below a high concrete slope which can collapse onto the trucks during a large quake.

Nuclear reactors in a disaster-prone country like Japan is obviously a bad idea and it’s frightening to think that this situation has existed for so many decades with our nearly total ignorance of the vulnerabilities and dangers of nuclear power plants right in our backyard. Not to mention the hush-hush coverups when accidents occurred.

No one can trust the power companies, government, and media anymore whenever they tell us, “it’s safe.” We’ve always been told to be prepared for earthquakes, but never for nuclear accidents. Japan already has earthquakes, tsunamis, typhoons, floods, and volcanic eruptions to contend with and doesn’t need another threat for mass disaster. This Japan Times editorial sums up the current situation and my feelings very well:
http://www.japantimes.co.jp/text/ed20120617a1.html#.T-EKOo4SoTM

Meanwhile, here are some of the many events, fireworks, and festivals in Shiga this summer (Web sites are in Japanese):

July 21, 2012 (Sat.), 7 pm-8:40 pm – Yokaichi Shotoku Matsuri, Higashi-Omi 八日市聖徳まつり
Folk dance festival in front of Yokaichi Station on the Omi Railways. Hundreds of people will dance the Goshu Ondo (江州音頭) which is a bon dance and folk song native to Shiga. First there will be a parade of mascot characters from 7 pm to 7:40 pm, followed by the folk dancers from 7:50 pm to 8:40 pm.
http://www.odakocci.jp/pickup/matsuri.html

July 28-29, 2012 (Sat. from 8 am, Sun. from 6 am), Japan International Birdman Rally, Hikone 鳥人間コンテスト
Held annually since 1977, contestants from all over Japan compete to see who can fly the furthest over Lake Biwa in their handmade and human-powered flying contraptions. On Sat., they will hold time trials for propeller planes and the glider contest. On Sun., human-powered propeller planes will compete for distance. The event is held on Matsubara Beach in Hikone, right near the Japan Center for Michigan Universities. Note that the event schedule/holding is subject to weather conditions. If it’s too windy (typhoon), it can be canceled or postponed. Sponsored by Yomiuri TV who will broadcast the contest on a later date. http://www.ytv.co.jp/birdman/index.html 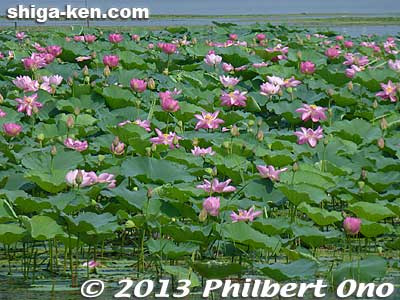 Aug. 1, 2012 (Mon.), 7:45 pm – 8:30 pm – Hikone Fireworks 彦根大花火大会
On Matsubara Beach, spectacular fireworks over the lake, including a 15-min. finale. Expect a large crowd. If canceled due to foul weather, it will be postponed to Aug. 2. Shuttle buses will be provided from JR Hikone Station taking you to the Hikone Sports Ground (県立彦根総合運動場) from where you walk to the beach for 15 min. http://www.hikoneshi.com/jp/event/articles/c/hanabi 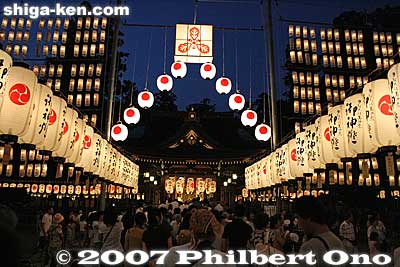 Aug. 3-5, 2012 (Fri.-Sun.), 7 pm – 9:30 pm – Taga Taisha Mantosai Lantern Festival 多賀大社万燈祭
Held at Taga Taisha Shrine in Taga, the Mantosai or 10,000-Lantern Festival is a beautiful night festival when over 10,000 paper lanterns are lit within the shrine grounds from 7 pm to 9:30 pm. The donated lanterns are for the repose of ancestral spirits. Various sacred dances and entertainment are also held nightly during the weekend festival.
http://www.tagataisya.or.jp/info/mantou/index.html 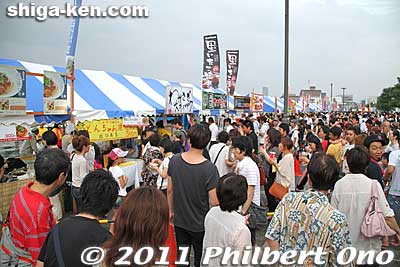 Aug. 4-5, 2012 (Sat.-Sun.), 11 am-9 pm – Shiga B-class Gourmet Battle, Otsu 滋賀B級グルメバトル
B-class gourmet (B-kyu in Japanese) is food that is cheap and aimed at the working class. It also includes good ‘ol home cooking. The Hama-Otsu lakefront (near Hama-Otsu Station on the Keihan Line) will have 60 food booths serving cheap food (priced from 100 to 500 yen) using homegrown ingredient(s) from Shiga such as Omi-gyu beef, red konyaku (devil’s tongue), and fish from Lake Biwa. It is a “battle” or contest where the food booths receive popular votes (via disposable chopsticks) from customers. A jazz festival will also be held and fireworks on both nights at 8:50 pm. Note that the food booths require tickets instead of cash. You can buy 1,000-yen ticket books having ten 100 yen tickets. The food festival was held for the first time last July and turned out to be wildly popular with a total of 120,000 people attending over the two-day period. It was so crowded and many booths ran out of food quickly. Best to go early. I only dread the summer heat, standing in long lines in front of the popular booths. Fortunately, even the not-so-popular food booths were good. Read my report for last year here.
http://www.b-shiga.com/

Aug. 6, 2012 (Mon.), 7:30 pm-8:30 pm – Nagahama Kita-Biwako Fireworks, 長浜・北びわ湖大花火大会
I thought last year was the last time Nagahama would hold their fireworks, but looks like they are having it again this summer. Details are sketchy as of this writing. To be held near Nagahama Port which is a god-awful, tiny place to watch it unless you reserve a space early. 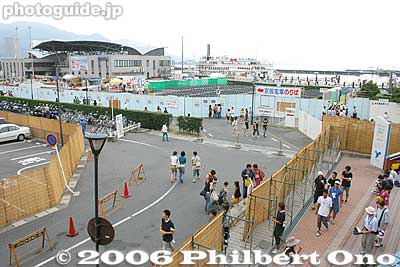 Aug. 8, 2012 (Wed.), 7:30 pm-8:30 pm – Biwako Fireworks, Otsu びわ湖大花火大会
Big display, but a steep admission (around 4,000 yen) is charged in prime viewing areas along Hama-Otsu. Hama-Otsu Port will be totally walled off so you cannot see the fireworks from the street. Farther away is the free area along Nagisa Park which is terribly crowded with people reserving viewing spots from noon. Spectacular show, but have fun trying to get home via the tiny nearby train stations or gridlocked roads afterward. Foul weather will postpone it to Aug. 10. (If the weather is questionable, call 0180-99-3339 to find out if the fireworks will be held or not.)
http://www.biwako-visitors.jp/hanabi/

Aug. 14-15, 2012 (Tue.-Wed.) – Hifuri Torch Festival, Hino 火ふり祭
Held for two evenings during the obon season (photo at top). Participants light their torches at Gosha Shrine and tap the torches on the road as they proceed to Hibarino park where the torches are thrown up to a large pine tree. The more torches get stuck on the tree, the better the next harvest will be. Near Hino Station (Ohmi Railways).
http://www.biwa.ne.jp/~hino-to/099.html 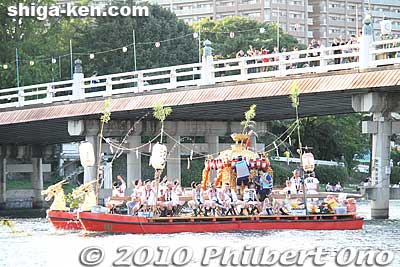 Aug. 17, 2012 (Fri.), 5 pm (boats depart), 8 pm-9 pm (fireworks) – Takebe Taisha Senko-sai Festival, Seta River, Otsu 船幸祭・瀬田川花火大会
One of Otsu’s Big Three Festivals, the Senko-sai is a portable shrine procession on boats going down Setagawa River from Seta-no-Karahashi Bridge to Nango sluice and back. Held annually by Takebe Taisha Shrine (worships legendary warrior Yamato Takeru) near the bridge. The festival starts at 5 pm when the portable shrines leave the shrine, and climaxes with fireworks on Seta River after the boats return at about 8:00 pm. The festival attracts few spectators (unlike the Tenjin Matsuri in Osaka), but large crowds start to gather in the evening for the riverside fireworks starting after the festival boats arrive back at 8 pm. Near JR Ishiyama Station and Karahashi-mae Station on the Keihan Line.
http://takebetaisha.jp/event/

Aug. 18, 2012 (Sat.), 8:30 pm – Makino Highland Reed Torch Festival, Makino, Takashima マキノ高原ヨシたいまつ祭り
The festivities start at noon climaxing at 8:30 pm with the lighting of numerous reed torches dotting the grassy highland area and ending with fireworks.  The festival event schedule is yet to be determined as of this writing. From JR Makino Station (Kosei Line), take the “town bus” and get off at Makino Kogen Onsen Sarasa (マキノ高原温泉さらさ). Buses leave Makino Station once an hour until 6 pm (schedule here).
http://www.makinokougen.co.jp/yoshitaimatsu.html

And don’t forget the white sand beaches on the western shores of Lake Biwa like Omi-Maiko for swimming. Wishing you all a cool summer, in more ways than one.