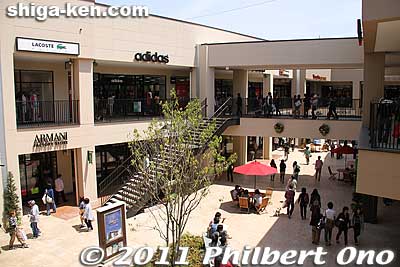 Feb. 14, 2010: ITO Miki, native of Hino, places 12th in the finals of the women’s freestyle moguls competition at the Vancouver Winter Olympics.

March 10, 2010: Google Maps street views start including photos of the streets of Shiga, mainly in Otsu, Kusatsu, and the road going around Lake Biwa.

March 21, 2010: Omi-Hachiman and the town of Azuchi merge, becoming a new city of about 82,000 residents. A mayoral election is held on April 25 to elect the new city’s first mayor (won by the mayor of the old Omi-Hachiman).

March 31, 2010: Shiga Kaikan, a public hall, theater, and exhibition space across from the prefectural office, is closed due to old age.

May 2010: Japan’s oldest clay figure (called “doguu” 土偶) is discovered in Aidani-kumahara ruins (相谷熊原遺跡) in Higashi-Omi’s Eigenji area near the Echigawa River. Slightly larger than a human thumbnail, the tiny clay figure is about 1.3 cm tall and depicts the upper torso of a female. The clay sculpture was dated as from the early Jomon Period, about 13,000 years ago.

June 2010: Overseas exports of Omi beef start with Macao after approval is obtained.

June 19, 2010: Natsuhara Heijiro, the founder of the Heiwado supermarket chain, passes away due to pneumonia at age 91.

July 11, 2010: Kada Yukiko is reelected for her second term as governor of Shiga Prefecture. She pulls in a record 419,921 votes, the highest number ever for a Shiga governor.

Oct. 24-25, 2010: Biwako Basho exhibition sumo tournament is held in Otsu’s Shiga Prefectural Gymnasium. Yokozuna Hakuho, on a winning streak of 62 consecutive wins, and the rest of the top sumo wrestlers and staff totaling about about 270 were on hand to entertain about 2,700 spectators each day.

Nov. 2010: The export of Omi beef to Singapore and Thailand starts.

Nov. 17, 2010: The former Toyosato Elementary School is burglarized. Twenty-two figurines based on the K-ON! anime program were stolen along with a portable cash safe containing almost 300,000 yen and three guitars modeled after those used in the anime series.

Dec. 10, 2010: A two-story ryokan called Nakamura-ya (中村屋) in Musa, Omi-Hachiman has been totally destroyed by an early-morning fire. Nakamura-ya has a 400-year history as one of the hatago inns of Musa, the 66th post town on the Nakasendo Road.