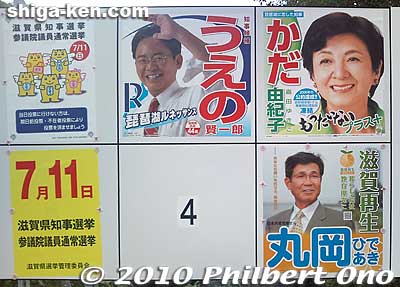 Voters went to the polls in droves on July 11, 2010 to reelect 60-year-old Kada Yukiko for her second term as governor of Shiga Prefecture. She pulled in a record 419,921 votes, the highest number ever for a Shiga governor. She broke the previous record of 319,563 votes in the 1994 gubernatorial election won by Inaba Minoru.

She managed to garner over 200,000 votes more than the 217,842 votes she got for her first election as governor four years ago. She also got twice as many votes as her closest rival, 44-year-old Ueno Ken’ichiro who attracted 208,707 votes. Ueno got more votes than Kada only in Takashima and Ritto cities.

In most other municipalities, Kada got more than twice the number of votes than Ueno, including the cities of Otsu, Hikone, Omi-Hachiman, and Moriyama whose mayors (including Ritto’s mayor) publicly opposed Kada’s reelection. Goes to show how out of touch mayors can be with their own citizens. Basically, these mayors are complaining about Kada not consulting or informing them beforehand about prefectural plans in their cities. Probably the reason is that these mayors wouldn’t agree anyway even if they were consulted.

Knowing how popular she is with the people, the other mayors in Shiga meanwhile ignored these five minority mayors opposing Kada. Perhaps these mayors’ public opposition to Kada spurred voters to vote for her to make sure she gets reelected.

Kada ran on a similar platform as the last election, using “Mottainai Plus” as her campaign keyword. During the past four years, she came through with her campaign promise of stopping wasteful governmental spending on huge, unneeded projects such as the Ritto shinkansen station and the Daidogawa Dam in Otsu. Especially when Shiga’s coffers are in dire straits. Kada worked to stop pork barrel projects and kept her campaign promise, winning her the people’s trust. By stopping or freezing these construction projects, she has saved Shiga 100 billion yen which she now plans to redirect for more essential programs such as hiring more nursery school teachers and elderly care workers.

According to a friend of mine who was there, it was a hot and steamy room (no air conditioning and windows were closed to reduce noise) at Kada’s campaign headquarters in Otsu when she won the election and appeared before supporters with her grandkids.

Voter turnout was high at 61.56% for the gubernatorial election. This was much higher than the last election’s 44.94%. The higher voter turnout is attributed to the coinciding elections of the Shiga governor and Shiga’s representative (won by Hayashi Kumiko) to the Upper House (House of Councillors) in the National Diet. Shiga’s total number of eligible voters on July 11, 2010 was 1,090,743. Over 60% of them voted.

For her second term, Kada wants to maintain dialog with Shiga residents and work together with them. She strives to work on a grassroots level. Indeed, her campaign activities included coffee time meetings in 21 locations in Shiga from April 2010. She met with 1,600 residents, listening to their concerns and problems about elderly care, support for small- and medium-size businesses, and other issues.

She plans to focus on making child-rearing and elderly care in Shiga easier and improve employment opportunities for young people. When asked whether she would run for a third term, she implied a yes. “Right after you give birth, you don’t feel like having another child. But as you raise the child and the child grows, you come to desire another one.”

Meanwhile, Ritto mayor Kunimatsu Shoichi announced on July 16, 2010 that he would not run for a third term as Ritto mayor in Oct. when mayoral elections will be held. He was the one who butt heads with Kada the most, over the Ritto shinkansen station. The Ritto mayor actually went against the majority of Shiga residents who opposed the shinkansen station. The governor represented the majority. Hopefully, the new Ritto mayor will be able to work better with the governor and we will see less pork barrel politics in Shiga.