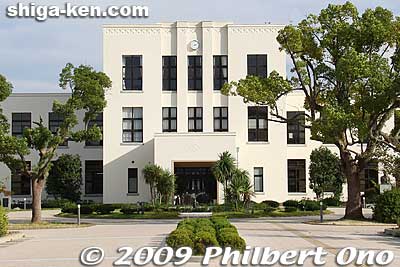 March 1, 2009: Hikone Prince Hotel is renamed Hikone View Hotel (彦根ビューホテル) upon the change of the hotel ownership from Prince Hotels to a Tokyo-based company called Study, Co., Ltd. The hotel is now part of the Itoen Hotel Group.

March 2009: The six northern Shiga towns of Torahime, Kohoku, Takatsuki, Kinomoto, Yogo, and Nishi-Azai (虎姫、湖北、高月、木之本、余呉、西浅井) took steps to merge with the city of Nagahama on Jan. 1, 2010. The proposed merger was approved by the prefectural government.

Mar. 4, 2009: Caffee (キャッフィー), the mascot character used for Sports Recreation Shiga 2008, was sworn in by Shiga Governor Kada Yukiko as one of Shiga’s official mascots, especially for sports events.
March: The construction of the new Maibara Station is pretty much complete with the opening of the east-west corridor on Mar. 21st.

Mar. 31, 2009: In a rare turnabout of policy, the Construction and Transport Ministry announced that it would freeze construction of Daidogawa Dam (大戸川ダム) in Otsu. The decision was made in consideration of opposition to the dam by the governors of Shiga, Kyoto, Osaka and Mie prefectures. The ministry had stated that the dam was needed to prevent any great flood that may occur. The affected municipalities (Otsu and Uji in Kyoto) and residents, however, were in favor of the dam.

April 2009: The Shiga Lakestars pro basketball team in the bj-league ends their debut season in 5th place with a record of 19 wins and 33 losses.

May 4, 2009: The Nyu Chawan Matsuri festival is held in Yogo for the first time in six years.

May 20, 2009: Shiga’s first case of swine flu (H1N1) is confirmed. A 23-year-old male student at the Biwako-Kusatsu campus of Ritsumeikan University is the first patient in Shiga. His symptoms are not serious and he was hospitalized. The news hits the local tourism industry very hard as school trips to Shiga are canceled. By late Sept. 2009, well over 2,000 people, mainly children, are infected in Shiga.

May 30, 2009: At a total cost of 650 million yen, the old Toyosato Elementary School is completely renovated and reopened to the public with an exhibition room, local public library, children’s room, and offices of the local board of education. The old building was repainted, reinforced against earthquakes, installed with an elevator, and preserved as much as possible. The second floor with classrooms is preserved as it was originally.

July 1, 2009: Smoking is banned in and around all major train stations in Otsu.

Aug. 24, 2009: Twelve-year-old Murakami Koji (村川康嗣) dies due to injuries from judo practice at Hatasho Junior High School in Aisho on July 29. Although the judo instructor was found to be at fault, he was not held personally liable for the death of the boy. The boy’s mother unsuccessfully sought damages from the instructor, although the town was held liable and was ordered to pay damage by the court.

Sept. 12, 2009: The movie, Katen no Shiro (Castle of the Fire God 火天の城) is released to theaters nationwide. The movie is about Okabe Mataemon, a Nagoya (Atsuta)-based master carpenter who in 1576 was ordered by Japan’s leading warlord Oda Nobunaga to build Azuchi Castle on Mt. Azuchi fronting Lake Biwa.

Oct. 23-25, 2009: The 2nd Yuru-Kyara (Mascot Character) Matsuri is held on Yume-Kyobashi Castle Road in Hikone. Well over 100 PR mascots adorned the road and posed for pictures. On the first day, most of the mascots appeared on stage at the Hikone Bunka Plaza where singer Hashi Yukio sang the Yuru-chara ondo song.