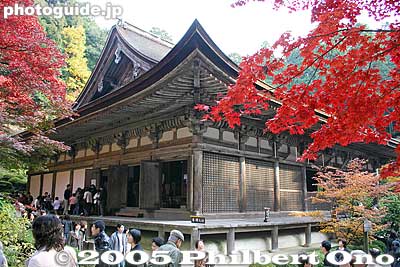 The new Mandala is in this Kongorinji Hondo Hall (National Treasure).

Kongorinji temple (金剛輪寺), one of the Koto Sanzan temple trio of Tendai Buddhist temples (National Treasures) in Aisho, eastern Shiga, lost its precious Mandala about 140 years ago during the Meiji Era (it is now owned by Nezu Art Museum in Tokyo and designated as an Important Cultural Property). They tried to get it back from the museum but to no avail.

So in April 2005, they set out to create a duplicate Mandala and it was recently completed after four years of painstaking art work. A service was held on May 10, 2009 at the temple to transfer a spirit to the Mandala and to install it in the temple. The service was officiated by the 91-year-old Tendai Zasu abbot (the sect’s top priest) as well. The Mandala, called Kongokai Hachiju-isson Mandala (金剛界八十一尊曼荼羅), is now open for public viewing in the temple’s Hondo hall until May 31, 2009. Public viewings of the Mandala will be held only once a year.

Buddhist art lovers will marvel at the Mandala’s depiction of 81 buddhas in the cosmos, with natural pigments brought in from China. Kamakura-Era techniques for the pigments and silk were used to create the 2-meter square painting on silk. The silk came from silkworms (in Ehime Pref. 愛媛県西予市) still creating the old type of silk used during the Kamakura Period. The pigments were also from crushed natural minerals like cinnabar for red, azurite for blue, and malachite for green. The Mandala cost about 30 million yen to make, made possible through the donations of almost 2,000 people.

*The temple is accessible by bus on weekdays from JR Inae Station on the Biwako/Tokaido Line. Buses leave at 9:17, 11:32, and 15:00. Buses do not run on weekends. Google Map