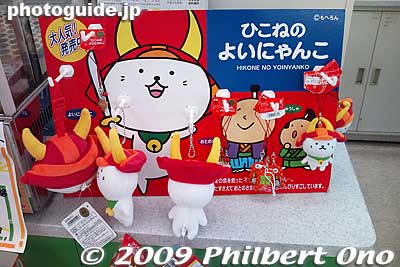 Hikone no Yoi Nyanko in Tokyo. 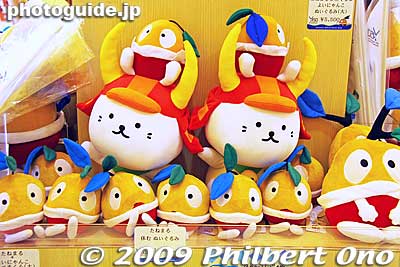 Hikone no Yoi-nyanko and Tanemaru at Yokohama Port Opening Expo.

Another snafu has erupted between the city of Hikone and Moheron (もへろん), the artist who created Hiko-nyan for Hikone Castle’s 400th anniversary celebration in 2007.

You might have noticed some Hiko-nyan merchandise being sold under the name “Hikone no Yoi Nyanko” (ひこねのよいにゃんこ). It looks exactly like Hiko-nyan, but under a different name and in poses different from what we usually see, and credited to Moheron.

In early Aug. 2009, I surprised to see my neighborhood convenience store in Tokyo selling Hikone no Yoi Nyanko dolls right next to the cash register, a very prominent place. (Photo above.) (But by late Aug., it was no longer there. They had either sold out or discontinued the product.) I also saw it sold together with Tanemaru, mascot character for the Yokohama Port’s 150th anniversary when I visited the port festival in Yokohama (photo above).

The city of Hikone has requested Moheron to stop marketing his Hiko-nyan lookalike. Copyright and trademark rights to Hiko-nyan had been obtained by the city, and Moheron was duly paid off (for a reported 1 million yen). Hiko-nyan was originally supposed to be used only for the castle’s celebration. However, Hiko-nyan has proved to be so popular nationally that Hikone decided to keep Hiko-nyan as its official mascot indefinitely. This upset Moheron who sought a court order in 2007 to stop Hikone from continuing to use Hiko-nyan. Both sides then reached an agreement where the city would be allowed to keep using Hiko-nyan as its mascot in three standard poses, while Moheron would be allowed to continue publishing his Hikone no Yoi Nyanko picture books for children. (Not sure if Moheron is male or female.)

But in the eyes of Hikone, Moheron has stepped out of bounds by starting to sell dolls and other souvenirs other than books. On Aug. 10, 2009, the city of Hikone issued a request to Osaka-based Moheron to stop sales of his Hiko-nyan lookalikes (other than the picture books), citing copyright and trademark infringement. He defiantly replied that it was possible for the same character to exist under two different names. Moheron claims that Hikone’s rights to Hiko-nyan are limited to the three original poses (showing Hiko-nyan jumping, sitting, and drawing a sword) adopted for the 400th castle celebration, and that he is freely allowed to create and market other poses of Hiko-nyan.

In late July 2009, the city requested local shops in Hikone to stop selling Moheron’s lookalike goods other than the picture books. But the shops did not comply (especially those in the Yonbancho Square shopping mall), citing that sales were good.

On Aug. 13, 2009, the Yonbancho Square shopping mall in Hikone, where both Hiko-nyan and Hikone no Yoi Nyanko goods are sold, distributed a flyer in the morning edition of major newspapers (circulation 60,000). It essentially said, “Please allow Hiko-nyan and Hikone no Yoi Nyanko to get along!” Yonbancho Square is actually a third-sector project, run as a joint venture by the city of Hikone and private companies. Hikone owns about 40% of the mall’s stock. The city’s own little baby rejected requests to stop selling Moheron’s goods. This embarrassment has prompted three city officials serving on the mall’s board of directors to resign, including a Vice-Mayor who served as Vice-President of the mall.

Everyone calls it “Hiko-nyan,” and I don’t see anyone (except Moheron) calling it anything else. You cannot call the same character two different names unless one is for Japan and the other is for overseas markets. Hikone does have the upper hand since they own the “Hiko-nyan” name (created by a naming contest) and everyone knows the name. Hikone no Yoi Nyanko is just too long as a name. (More apt as a picture book title which it is.) But Moheron is showing strong marketing skills with a national presence.

Hikone will either have to take Moheron to court or hope that the Hiko-nyan “imposter” will fizzle out naturally when people recognize that it’s not the original Hiko-nyan. It might be best to let the buying public decide whether they want only the real Hiko-nyan or both the real and “imitation” one.

*Hiko-nyan was created as the official mascot for the 400th anniversary celebration of Hikone Castle held in 2007. The city of Hikone accepted mascot proposals from professional illustrators and selected Moheron’s entry which was called “Kabuto-neko” (Helmeted Cat). The name “Hiko-nyan” was decided following a nationwide calling for a mascot name, and “Hiko-nyan” was selected.