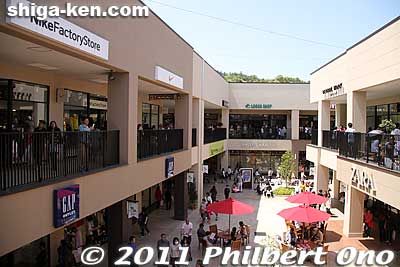 Shiga now has another megamall, the much-publicized outlet mall called Mitsui Outlet Park, Shiga Ryuo (三井アウトレットパーク 滋賀竜王) in Ryuo-cho. Opened today on July 8, 2010, the mall is near the Ryuo Interchange on the Meishin Expressway, making it readily accessible by car for shoppers coming from Kyoto, Nara, Mie, and Gifu. It also targets Chinese tourists traveling from the Kansai area to Mt. Fuji and further. Merchants do accept Chinese credit/debit cards. It is the first outlet mall in the Kyoto-Shiga area.

The two-level mall has 165 stores, 145 of which are outlet shops. Most are clothing shops and some are first-time outlet shops. There are many big names including Burberry, Gap Outlet, Barney’s New York Outlet, Armani, Paul Smith, Coach, Beams, Ralph Lauren, Nike, Bebe, Edwin, Vans, Levi’s, Puma, and Adidas. The shops open from 10 am to 8 pm. They expect to attract 4 million shoppers annually.

If you don’t have a car, you can take a local bus from Omi-Hachiman Station or Yasu Station. The ride takes 30 min. in normal traffic. Buses leave twice an hour, costing 510 yen one way from Yasu Station and 500 yen from Omi-Hachiman Station. Expect heavy traffic and crowds during the first few weeks, especially on the weekends until July 19, 2010, when many of the shops will hold an opening fair with special sale prices.

Mitsui Outlet Park is actually a chain of 10 outlet malls developed by Mitsui Fudosan real estate co. All are called “Mitsui Outlet Park” and tagged with the respective location. That’s why “Shiga Ryuo” is part of the mall’s name.