Skip to content
Home Festivals in Spring Chawan Matsuri at Yogo on May 4, 2009

Yogo town, home of Lake Yogo in northern Shiga, held an unusual festival called the Chawan Matsuri or Teacup Festival. It’s been 6 years since it was last held in 2003. It supposed to be held every 3 years, but depopulation and the lack of funds and young people has threatened the continuation of the festival.

It was a very impressive festival with a variety of colorful attractions. Definitely was the best Golden Week festival I saw in Shiga.

The festival started centuries ago when a potter living in Yogo (上丹生) offered teacups to the gods at Niu Shrine in appreciation of the earth used for pottery and his pottery skills.

The festival started with a Shinto ceremony at 10 am at Niu Jinja 丹生神社 shrine. At 11 am, a series of Chigo-no-Mai sacred dances were performed by boys in kimono. Then a procession from Niu Shrine to Hachiman Shrine 1 km away, with a lunch break at Chawan Matsuri no Yakata museum. The floats are crowned with a very tall (over 7 meters) decoration of dolls, bowls, and other objects connected together and somehow do not fall down. The climax is when they detach the supporting poles from the lofty float decorations.

Shiga Governor Kada Yukiko was also on hand to watch the procession and even pull the floats. I got good shots of her too. Google Map
See my photos: https://photoguide.jp/pix/displayimage.php?album=742 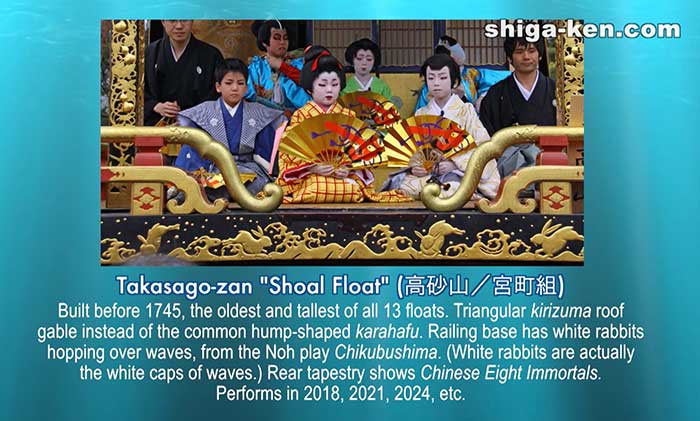