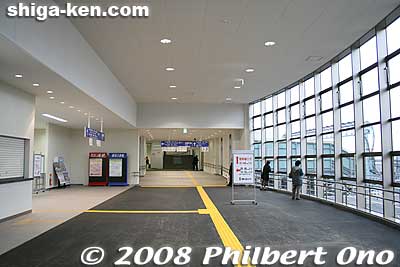 The new Maibara Station has been under construction since Feb. 2006. It will be completed in Aug. 2009.

For a long time, we could not go through the train station from the west exit to east exit and vice versa without having a train ticket. (We had to go around far away through a tunnel.) We can now freely pass through the corridor between the east and west exits from March 21, 2009. This is the last major stage of construction to be completed. A ceremony was held on the 21st to mark the opening, complete with Shiga LakeStars cheerleaders. There are also elevators and escalators.