Adapted in English by Philbert Ono based on an old folktale.

Once upon a time during Japan’s Heian Period in the 10th century, there was a young warrior prince named Fujiwara Hidesato (藤原 秀郷), also known as Tawara-no-Toda (俵藤太). One day, when he was going to cross the Seta Karahashi Bridge in Otsu (Shiga Prefecture), he saw a big commotion at the end of the bridge.

“How awful!! What should we do??” “Look at how big it is!!” “I’m too frightened to cross the bridge!” People were fraught with fear and anxiety.

When Hidesato looked at the bridge, he saw a giant dragon-serpent (orochi) sleeping on the middle of the bridge.

“Oh, so that’s it. Well, it doesn’t scare me at all,” thought Hidesato. He started walking across the bridge. Everyone gasped as they watched him. “Who is that?? He is either very brave or absolutely CRAZY!!” said one man.

Hidesato was fearless as he approached the giant orochi. He then shocked everyone by climbing and stomping over the giant serpent and walking to the other end of the bridge. The giant serpent did nothing and everyone was amazed. “He’s the bravest man in Omi!!” shouted one man. The dragon-serpent slithered back into the lake.

That evening, Hidesato stayed at a lakeside inn. When he was about to sleep, a beautiful, radiant maiden appeared before him.

In a heavenly voice, she spoke, “I am the daughter of the Dragon King, the god of water and all creatures in Lake Biwa. I have come to request a favor. A monster centipede (omukade) on Mt. Mikami has been killing and eating our native lake fish like nigorobuna and gengorobuna carp that are the Dragon King’s sons and daughters. We were looking for a strong and brave warrior who can get rid of the monster centipede. So I disguised myself as a giant serpent on Seta Karahashi Bridge and waited for someone as brave as you. Without fear, you walked over me and crossed the bridge. I was very impressed by your bravery. Can you please help us get rid of the monster centipede? It can wrap itself around Mt. Mikami seven and a half times. It’s huge.”

Hidesato was very taken by the angelic princess. “Yes, I would be happy to do it. I love great challenges. Life would be boring without any challenges.”

He then headed toward Mt. Mikami while carrying a bow and large arrows. He could hardly wait for the monster centipede to show itself.

As he waited, the late-night dark sky was soon filled with a terrible thunderstorm. The lake swelled with rough waves, and the earth started to shake and rumble. On Mt. Mikami, a thousand little fires danced in the darkness led by two big fireballs. Hidesato didn’t have a good feeling about this. Very soon, a huge, black body with many thick legs on both sides appeared and coiled around the mountain. It was the monster centipede! Along with the thunder, it made a dreadful sound as it moved along slowly.

Hidesato got his thick arrow and shot it right between the two fireballs which were the centipede’s eyes, but it only bounced off the centipede. He shot another arrow, and again, nothing happened. “Whoops!! That didn’t work at all!”

For the first time in his life, he started to feel a little panicky. He had only one arrow left. He prayed to Hachiman, the guardian deity of the samurai and the god of archery. He then recalled that human saliva can penetrate and poison a centipede. He spit on his fingers and rubbed the saliva on the arrowhead.

He held the third arrow firmly and pulled the bow string as much as he could behind his ear. “OK you giant mukade, take that!!” He let out a yell, “YAHH!!” as he let go of the string and shot the arrow at the centipede’s forehead.

The arrow whizzed through the dark rain and perfectly pierced the giant mukade. Hidesato pumped his fist into the air and exclaimed, “Alright I got him!!” His prayers were answered.

Then suddenly, the thunderstorm cleared, the little fires stopped, the lake calmed, and the rumbling earth quieted. The monster mukade was killed. Hidesato gave a short prayer for the soul of the omukade so that it could rest in peace.

A few days later, the Dragon King’s daughter visited Hidesato. “Thank you very much for getting rid of the giant centipede! We are all so happy and relieved in Lake Biwa! Our unique, native fish found nowhere else in the world can now swim without fear. My father, the Dragon King, wants to invite you to our palace in Lake Biwa and thank you personally.” Hidesato could not refuse.

They rode on the backs of giant Lake Biwa catfish and traveled deep down into the lake below Seta Karahashi Bridge where even sunlight could not penetrate. The water was cold and dark. Then suddenly colorful lights emerged from the lake bottom. It was the palace of the Dragon King who has been living here for over 2,000 years protecting Lake Biwa and all its creatures. All local fishermen worshipped him along with Benzaiten, the goddess of everything that flows.

The Dragon King was overjoyed that Hidesato was able to put down the monster mukade. In appreciation, the Dragon King held a grand banquet for Hidesato with delicious delicacies from Lake Biwa such as funazushi (fermented nigorobuna carp), Biwa salmon (Biwa masu), and Seta shijimi clam soup. He also showered Hidesato with many special gifts including a straw barrel of rice that never ran out of Omi rice, a roll of silk fabric that never ran out of silk, a hot pot that always cooked food perfectly, a sword, and a temple bell that was made while the Buddha was alive.

The Dragon King’s servants carried all these gifts to Hidesato’s home. Since he had no use for the bell, Hidesato donated the bell to Miidera Temple in Otsu which became the temple’s first bell. With the other gifts, Hidesato led a happy and prosperous life. THE END

Also read “The Birth of Chikubushima” 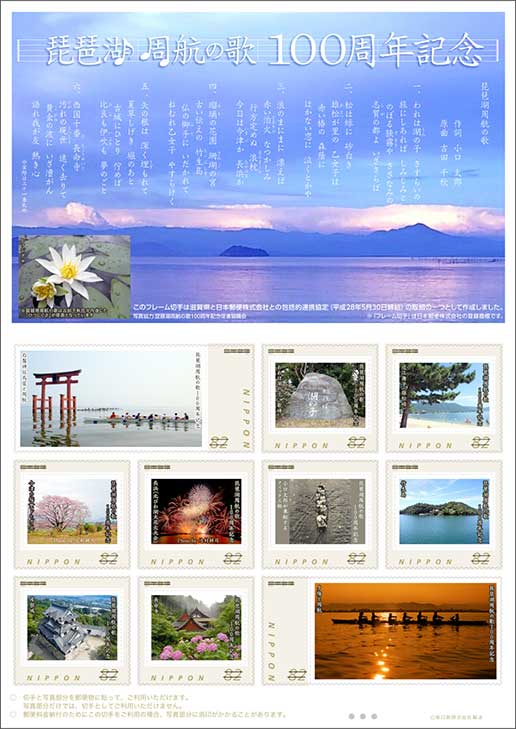