June 2017 was the 100th anniversary of Biwako Shuko no Uta (琵琶湖周航の歌 aka Lake Biwa Rowing Song), Shiga’s most famous song and one of Japan’s best hometown songs.

To mark this milestone, a series of events were held in late June 2017 in Shiga. They included a four-day rowing excursion around Lake Biwa during June 24–27, a choir contest in Imazu on June 25, the unveiling of a new song monument in Nagahama on June 25, and a major concert at Biwako Hall in Otsu on June 30. I didn’t see everything, but I did get a glimpse of the major events.

The rowing excursion was named Nazori Shuko (なぞり周航) which means “Tracer Rowing Excursion.” It traces the rowing route the Kyoto college boys took in 1917 around Lake Biwa, going clockwise from Otsu and on to Omi-Maiko, Imazu, Chikubushima, Nagahama, Hikone, Omi-Hachiman, and back to Otsu. The rowers lodged in Omi-Maiko, Imazu, and Hikone. The rowing excursion was largely organized by Kyoto University Rowing Club’s alumni association (Noseikai 濃青会) with the cooperation of water sports organizations and fishing cooperatives in Shiga. About 120 rowing club alumni took turns rowing on three modern boats designed for long-distance rowing.

For four days, they rowed from around 5 a.m. until early afternoon. This is when the lake waters are most calm and air temperatures are cooler. The rowing excursion also had the participation of local people (住民参加). At times, the rowers were escorted by yachts, canoes/kayaks, and even standup paddleboarders. And at each major stop, the rowers were greeted by local folks including taiko drummers, dancers, and other well-wishers. The rowers also sang the song at each song monument around the lake.

Also on June 25, a new song monument in Nagahama was unveiled in Hokoen Park near the lake shore near Nagahama Castle (map here). In summer 2016, a  group of Nagahama residents formed a nonprofit (長濱歌碑でつなぐ会) to plan, design, finance, and build this new monument. They solicited donations to help foot the cost of about ¥8 million. Although they weren’t able to get more than ¥4 million in public donations, they somehow managed to pay for the new monument in full.

Since Nagahama is a noted glass maker, they decided to make the new monument out of glass made in Nagahama. The new monument also functions as a park bench where you can sit and watch the sunset over the lake. It is perhaps Japan’s most expensive park bench. Seating four people, the glass bench is engraved with Verse 3 of Biwako Shuko no Uta where it mentions Nagahama. (“Today is Imazu or, Nagahama, huh.”)

The opening ceremony was held at around 5:30 p.m. for sunset, but it was too cloudy. The ceremony was attended by a substantial crowd who came to see singer Kato Tokiko, former Shiga Governor Kada Yukiko, Nagahama Mayor Fujii Yuji, and local singers Kitagawa Akihiro and Matsuura Yoko help unveil the new monument.

Earlier in the day in Nagahama, they held stage entertainment and boat cruises with local singers. (Couldn’t see any of it because I was in Imazu.)

June 25 (Sun.) was the busiest day because it was the closest weekend to the actual 100th anniversary on June 28. That night, I went back to Imazu and stayed at a hotel near the station.

On June 26, the third day of the rowing excursion, I checked out of my hotel near Omi-Imazu Station at 4:30 a.m. and joined the Kyoto University Rowing Club’s official photographers on a fishing boat. We followed the rowers from Imazu to Osaki, Chikubushima, Nagahama, and Hikone and kept our cameras busy.

The three boats they used belong to the Kyoto University Rowing Club. Thanks to donations from rowing club alumni, they were built in Shiga several years ago and designed especially for long-distance rowing around the lake. The boats have sliding seats and are quite stable in the water. They can also expel water automatically. It’s a far cry from the wooden, fixed-seat boats they used 100 years ago.

The boats are normally used by freshmen members of the Kyoto University Rowing Club to row around the lake every summer.

I had fun following and photographing/filming the rowers on the lake, but I declined to follow them again on the next (last) day. (Too much sunburn.) 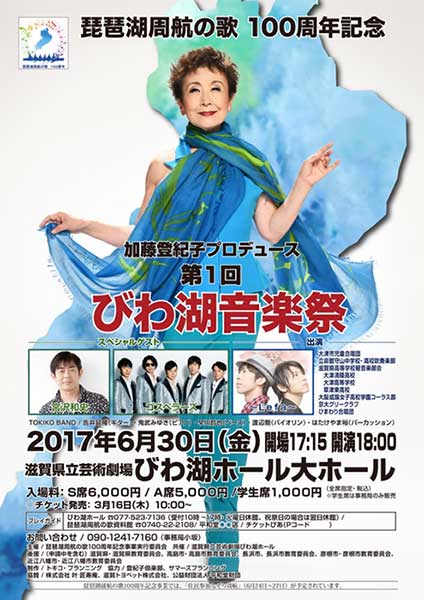 The rowing excursion was soon followed by the 1st Biwako Ongakusai (Music Festival) held on June 30, 2017 at Biwako Hall in Otsu. It was organized by a committee led by former Shiga Governor Kada Yukiko and produced by singer Kato Tokiko who made Biwako Shuko no Uta a national hit in 1971. Headlining the concert were top artists Miyazawa Kazufumi (Shima Uta was fantastic), Gospellers, the Tokiko Band (great musicians), and ~Lefa~ from Nagahama. The first half had local youth groups and choirs from Shiga, Kyoto, and Osaka. The second half featured the headlining artists and Kato Tokiko herself.

This is the first Biwako Music Festival and they plan to hold this concert annually around Lake Biwa in the places mentioned in the song. So next year in 2018, it will be held in Omi-Maiko at Biwako Seikei Sport College whose president is former Shiga Governor Kada Yukiko. Then in Imazu in 2019. Kato Tokiko will be the producer of the annual concerts. It will take several years before the concert is held in each place mentioned in the song.

One major objective of the Biwako Music Festival is to perpetuate Biwako Shuko no Uta to the younger generations since it is not really taught in schools in Shiga. That’s why you will see local youths performing as well.

It was a wonderful concert showcasing a wide variety of music and artists, both amateur and famous. We look forward to the next concert next year in Omi-Maiko.

Otsukaresama and thank you to Kada Yukiko, Kato Tokiko, Kyoto University Rowing Club and their alumni association (濃青会), and everyone else who worked so hard to plan, coordinate, and execute these memorable events like never before. It got many local people involved and I was honored and happy to take part.

This hometown song must definitely be perpetuated to current and future generations. It’s an important part of Shiga’s history and cultural heritage and should be designated as an Important Intangible Cultural Property (重要無形文化財). I hope that local educators and parents will come around and realize how precious this song really is to Shiga. Showcasing not only pretty scenes in Shiga, but also life itself. And the melody is classic and timeless. The story behind the song and its creators is also most fascinating. At the same time, the song retains an aura of mystery and intrigue.

On April 16, 2017, we at shiga-ken.com also celebrated the song’s 100th anniversary by holding a Lake Biwa Rowing Song mini concert in English in Imazu. Jamie and Megan Thompson visited Shiga for this occasion and we also had Kikui Satoru and Kondo Yumiko play yoshibue reed flutes as a duo named “Lake Reed.” Here are two videos of our event:

Commemorative events in Shiga are largely over, but not in Kyoto. Kyoto University will be celebrating the song’s 100th anniversary on Nov. 25, 2017 with the unveiling of a song monument plaque on campus and a lecture (by song researcher Iida Tadayoshi) and concert during their autumn school festival. I will be attending as well and looking forward to meeting guests from Okaya, Nagano (songwriter Oguchi Taro‘s hometown) and Niigata (melody composer Yoshida Chiaki‘s hometown).

Update: Here’s my blog post and video of Kyoto University’s celebration of the song’s 100th anniversary on Nov. 25, 2017.