Recommended festivals, events, exhibitions, and fall leaves in Shiga Prefecture in November 2015. (Most official Web sites are in Japanese only.) Compiled by Philbert Ono. Updated: Oct. 12, 2015

*From 2015, the date of the Omi Jingu Shrine Yabusame Horseback Archery has changed from Nov. 3 to the first Sunday in June (already held earlier this year).

November 15-30, 2015
♦ Hiyoshi Taisha Shrine Maple Festival Light-up, Otsu
Hiyoshi Taisha Shrine at the foot of Mt. Hie in Otsu, Shiga Prefecture is the head shrine for all Hiyoshi, Hie, and Sanno Shrines in Japan (around 2,000). The spacious grounds includes two shrines that are National Treasures and 3,000 maple trees lit up at night 5:00 pm – 8:30 pm during this period. Even the green leaves look great against the dark sky. Highly recommended if you’re in that part of the city. Near Hiezan Sakamoto Station on the JR Kosei Line and Keihan Line’s Sakamoto Station. Map | Photos
もみじ祭
http://hiyoshitaisha.jp/event/momiji/

November 21-29, 2015
♦ Koto Sanzan Temple Trio autumn foliage, Kora, Aisho, and Higashi-Omi
Koto Sanzan (湖東三山) is a trio of large Tendai Buddhist temples in eastern Shiga: Saimyoji (西明寺) in Kora, Kongorinji (金剛輪寺) in Aisho, and Hyakusaiji (百済寺) in Higashi-Omi. They are famous for autumn leaves and structures that are National Treasures or Important Cultural Properties. Each temple also has its own unique characteristics. Saimyoji has a National Treasure Hondo worship hall and National Treasure pagoda that you can enter. It’s also deservedly one of Japan’s 100 Grand Autumn Foliage Sites. Kongorinji has many little Jizo statues and a National Treasure Hondo main hall housing an 11-faced Kannon statue and 13 other statues that are Important Cultural Properties. It is also displaying Japan’s oldest Daikokuten statue until Nov. 30, normally hidden from view. It’s 1,200 years old. Hyakusaiji is famous for giant straw sandals on a gate and a Japanese garden. Established by Shotoku Taishi in 609, Hyakusaiji is Shiga Prefecture’s oldest temple and one of Japan’s oldest. The Hondo temple hall has an 11-faced Kannon statue carved by Shotoku Taishi, a prince credited with spreading Buddhism in Japan.

During this period, convenient shuttle buses (Koto Sanzan Shuttle Bus) run every day between these three temples and a few train stations. The shuttle buses run most frequently from north to south, that is, from Saimyoji to Kongorinji and then to Hyakusaiji. If you start from the north, board the shuttle bus at Hikone Station. The bus will take you to Taga Town Hall from which you transfer to a bus bound for Saimyoji first.

From the south, board the bus at Ohmi Railways Yokaichi Station. The bus will stop at Hyakusaiji first. (A different bus also goes to Eigenji.) Check the bus stop for bus departure times. After touring Saimyoji (or Hyakusaiji), catch another shuttle bus to the next temple. Shuttle buses also run from Hyakusaiji to Eigenji (listed below), another temple famous for foliage. From Saimyoji, the last shuttle bus leaves at 5:23 pm for Taga Town Hall where you can catch a bus to Hikone Station (or walk to Taga Taisha-mae Station).

Bus fare is 200 yen per ride which is only 10-20 min. They also offer a day pass called Momiji kippu (Maple ticket) for 1,800 yen. This day pass includes passage on all Koto Sanzan shuttle buses and all Ohmi Railways trains. A good deal if you plan to ride on Ohmi Railways. Each temple also charges admission of 500 yen. Note that if you like to take your time, you might not be able to see all three temples in one day.
Saimyoji Map | Kongorinji Map | Hyakusaiji Map
秋の湖東三山
http://www.ohmitetudo.co.jp/bus/7859/index.html/
http://www.ohmitetudo.co.jp/image/kotousannzansyato_ycyrontvxrytjebndwkbvsjzxjycfcvc.jpg
Official sites: Saimyoji | Kongorinji | Hyakusaiji

November 8-29, 2015
♦ Eigenji Temple Autumn Foliage and Light-up, Higashi-Omi, 5:00 pm – 8:30 pm for light-up
Although this temple is not one of the Koto Sanzan Temple Trio, it’s also famous for autumn leaves with 3,000 maple trees. Along with Saimyoji, Eigenji is also one of Japan’s 100 Grand Autumn Foliage Sites. Established in 1361, Eigenji belongs to the Zen Rinzai Buddhist Sect (Eigenji School). Since it’s a different sect, Eigenji is not a member of the Koto Sanzan trio of Tendai Sect temples. Impressive during the day, but also beautiful at night when the leaves are illuminated along with the walking paths. Admission 500 yen.

From Ohmi Railways Yokaichi Station, go to Bus stop 1 and take the bus going to Eigenji Shako (永源寺車庫) and get off at Eigenji-mae (永源寺前). Takes about 35 min. Bus schedule from Yokaichi Station on weekdays | Saturday | Sunday. Note that from Eigenji-mae, the last bus for Yokaichi Station leaves at 7:26 pm on Sat./Sun. and 8:27 pm on weekdays. Shuttle buses from Hyakusaiji also run to Eigenji during Nov. 16-Dec. 1. Map
永源寺 ライトアップ
http://eigenji-t.jp

November 13-29, 2015
♦ Hyozu Taisha Shrine Garden Autumn Foliage Light-up, Yasu, 5:45 pm – 9:00 pm (enter by 8:30 pm)
Established in 717 (Nara Period), Hyozu Taisha Shrine has a noted Japanese garden with a pond ringed by small rolling hills and autumn leaves. The fall leaves certainly look colorful and impressive when illuminated in the evenings and reflected in the pond. Mini concerts will be held during the foliage illumination in the evenings.

A short bus ride from JR Yasu Station’s North Exit (Kita-guchi). Take the Yoshikawa Line (going to Nishi Kawahara 2-chome 西河原２丁目 or Ayame-hama あやめ浜) and get off at Hyozu Taisha 兵主大社. Buses are infrequent (schedule here). The last bus leaving Hyozu Taisha for Yasu Station leaves around 9:02 pm on weekdays and around 7:17 pm on Sat./Sun. Or take a taxi (costing about 2,000 yen from Yasu Station). Map
兵主大社庭園紅葉ライトアップ

November 14-29, 2015
♦ Genkyuen Garden Autumn Foliage Light-up, Hikone, 6:00 pm – 9:00 pm (enter by 8:30 pm)
Adjacent to Hikone Castle, Genkyuen was built as a castle garden in 1677 by Ii Naooki, the fourth lord of Hikone Castle. I would call this Shiga’s best place to view autumn foliage illumination. The pond’s reflection of the colorful autumn leaves at night doubles the impact. Hikone Castle in the background is also lit up for a perfect night scene. Reminds me of a master painter using a black canvas. Admission 500 yen (200 yen for jr high and younger). Short walk from JR Hikone Station. Map
錦秋の玄宮園ライトアップ
http://www.hikoneshi.com/jp/event/articles/c/kinshu

November 14-December 6, 2015
♦ Kyorinbo Garden Autumn Foliage Light-up, Azuchi, Omi-Hachiman, 5:30 pm – 8:00 pm (enter by 7:30 pm)
Beautiful Japanese garden designed by Kobori Enshu. Part of a temple at the foot of Mt. Kinugasa. Autumn foliage at night is reputed to be most beautiful. Of course, you can also go during the day. Tripods/monopods and food are not allowed. No photography inside the buildings. The garden is usually open only on weekends and holidays, but it will be open every day during Nov. 1 to Dec. 15. Admission 500 yen (200 yen for jr high and younger). From JR Azuchi Station, take a taxi for 10-min. ride. Google Map
石の寺 教林坊 紅葉ライトアップ
http://www.d1.dion.ne.jp/~marche/kyourinbou/

November 29, 2015
♦ Yabusame at Hikone Castle, Hikone
To mark the 200th anniversary of Lord Ii Naosuke’s birth, a special yabusame event will be held at the castle main gate. Details to be determined.
http://naosuke-200th.com/en/event/

November 28-29, 2015
♦ Hot Air Balloon Over Lake Biwa, Takashima, early morning
Dramatic sight of hot-air balloons crossing Lake Biwa. They start off very early in the morning so you would have stay near the launching beach in Takashima. Note that weather conditions can cancel the event.
熱気球琵琶湖横断
http://www.takashima-kanko.jp/

Held annually on the first Sunday of December, the Tarobo Shrine Fire Festival burns a big pile of 100,000 wooden prayer tablets called goma (護摩) collected from believers all over Japan. The tablet is written with the believer’s name, address, and prayer wish. The fire burns as a prayer for family health and safety. After the fire settles down, barefoot priests walk over the hot ashes. Very dramatic festival (photo here).
Short walk from Ohmi Railways Tarobogu-mae Station. Map
太郎坊宮お火焚大祭
http://www1.ocn.ne.jp/~tarobo/ 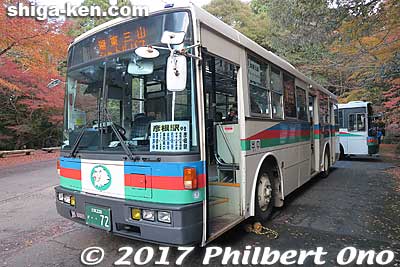 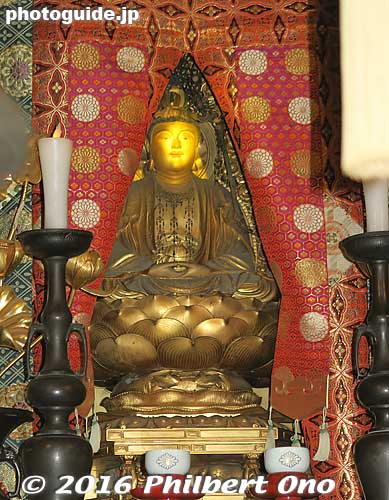 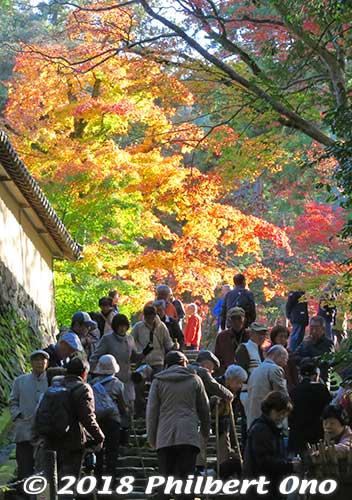