Shiga is hardly a place I would recommend or brag about for skiing, but I understand that Shiga’s slopes are convenient for many people in Osaka/Kyoto coming to Shiga to ski. It’s better than nothing, and good for kids and beginners who don’t mind slushy snow.

But there is actually something to brag about skiing in Shiga. It so happens that Mt. Ibuki in Maibara is one of the first places where skiing started in the Kansai region. Mt. Ibuki was also where people first began skiing in Shiga. All thanks to Nakayama Saijiro (中山再次郎 1867-1963), principal of a high school in Kyoto (forerunner of Toba High School 鳥羽高校) who was a pioneer in spreading the sport of skiing in the Kansai region.

He started bringing his students annually to Mt. Ibuki for skiing from around 1913-14, a century ago. They hiked up to the 3rd station (san-gome) and skied around the 3rd and 4th stations. It must’ve been quite an exercise without ski lifts.

Nakayama sensei had learned how to ski from an Austrian. His bronze statue can be found on Mt. Ibuki’s 3rd station. Nakayama sensei also happens to be my grandfather’s high school principal in Kyoto. However, I’m told that my grandfather wasn’t into skiing so he might not have been one of the students who went to Ibuki to learn to ski.

During the US Occupation of Japan after World War II, my relatives tell me that they remember seeing US military personnel from Camp Otsu coming to Ibuki (in a truck or jeeps) to ski on weekends. Since they gave out candy and cookies, they were very popular with the local kids. In those days, Japanese kids only had senbei crackers, rice crackers, and biscuits. So those sweet American cookies tasted oh so good. Meanwhile, their parents found that the Americans were quite benevolent, contrary to what they were told during the war.

It wasn’t until Dec. 1956 when the Mt. Ibuki Ski Grounds (伊吹スキー場) opened for business at the 1st to 3rd stations by Ohmi Railways. Ski lifts were finally built by Aug. 1958 up to the 3rd station. More modern ski lifts were constructed in the late 1960s and mid-1980s. In Jan. 1989, a gondola lift going from the foot of the mountain all the way to the 3rd station opened. The gondola cabins could carry six people.

Due to a chronic lack of snow, fewer skiers in Japan, and the more popular Oku-Ibuki Ski Grounds (opened in 1970) further north, the original Ibuki Ski Grounds closed in Oct. 2005 after 48 years in business. A Tokyo-based company bought and took over the ski facilities, but it closed the ski grounds in 2008 citing the lack of snow and skiers. The gondola kept operating only during the summer hiking season, but it too was shut down in 2011. Today, Oku-Ibuki with better snow, better runs, and convenient roads is the ski area of choice in Shiga. The old Mt. Ibuki Ski Grounds now sees paragliders and campers instead.

Meanwhile, on the opposite side of the lake in Makino village (now part of Takashima), another skiing pioneer named Hiroi Shinnosuke (広井親之助) found that skiing was feasible at Makino. Hiroi was a physical education teacher at Imazu High School (forerunner of Takashima High School). Inspired by Nakayama Saijiro, he started developing skiing in Makino from Jan. 1917 and called it Makino Ski Grounds (牧野スキー場).

In 1925, Hiroi sensei held a skiing contest sponsored by the Asahi Shimbun newspaper in Osaka. Most of the contestants were local elementary to high school kids. Since Makino was still quite isolated transportation-wise, few people from afar participated.

Thus, Mt. Ibuki and Makino Highland are among the oldest ski grounds in Kansai along with Hyogo Prefecture’s Kannabe Highland and Hyonosen  (神鍋山、氷の山).

In Dec. 1929, Makino Ski Grounds was renamed in katakana (マキノスキー場) when it turned commercial as a joint venture by Keihan Railways and the Lake Biwa cruise company named Taiko Kisen (太湖汽船). Since “Makino” in katakana became widely known in the Kansai region because of the ski grounds, it was adopted in 1955 as the newly-formed town’s name when Makino village merged with three neighboring villages. The town of Makino-cho (マキノ町) thereby became Japan’s first municipality to have a katakana name. (Makino is now part of the city of Takashima.)

Modern skiing was first introduced to Japan in 1911 in Takada (Joetsu), Niigata Prefecture by an Austrian who used it for military training. Skiing soon spread and developed as a recreational sport beginning with northern Japan. In the early years, popular ski grounds in Japan were usually in onsen hot-spring areas. Local ryokan inns, etc., catered to the skiers and made investments to expand skiing facilities. By the 1930s, Japan had a ski boom as the masses got turned on to skiing. Japan National Railways operated extra “ski trains” to Mt. Ibuki. From 1930, Keihan Railways operated direct trains from Osaka/Kyoto to Hama-Otsu Port where skiers would transfer to Taiko Kisen’s “ski boats” (スキー船) for Kaizu Port near Makino.

Skiers from Kyoto/Osaka would take an evening train to Hama-Otsu and board the ski boat at Hama-Otsu Port. The boat departed at 12 midnight and the skiers slept overnight onboard. When the boat arrived at Kaizu Port in the early morning around 5 am, the skiers walked or took a bus for Makino Ski Grounds. After skiing during the day, the skiers would return and board the boat departing Kaizu Port at 5 pm for Hama-Otsu. The ski boat proved to be popular with day-trip skiers from Kyoto and Osaka on the weekends. These ski trains and boats made Makino Ski Grounds viable since Makino was way out in the boondocks and had no onsen or other attractions to fall back on. Keep in mind that they still didn’t have ski lifts. Something unimaginable today.

Then in 1931, the Kojaku Railway (forerunner of the JR Kosei Line) from Hama-Otsu Station was extended to Imazu Station close to Makino. This brought even more skiers to Makino. By the early 1960s, the road to Makino improved enough for ski buses to carry skiers directly from the Kansai region to Makino, replacing the ski boats and eliminating the troublesome transfers between trains and boats.

A ski lift finally opened in Makino in 1956, and another was added in 1964 funded by the town and Kojaku Railway.

However, Makino suffered a drastic drop in skiers after Hira Ski Grounds opened in 1961 (closed in 2004), Hakodateyama in Imazu opened in 1962, and Biwako Valley (originally named Sankei Valley) opened in 1965. Since these new ski areas were closer, skiers from Kyoto/Osaka flocked to them.

Although you can still ski at Makino Kogen Highland, its low altitude, slushy snow, gentle slopes, and lack of variation in ski runs relegate it to mainly beginners and sled-toting kids. However, Makino still attracts hikers and nature lovers in the warmer seasons. It even has a hot-spring facility.

Japan’s skiing population has dropped dramatically since the turn of this century. Fewer people are willing to take the time, trouble, and expense to go skiing. I’m sure everyone thinks it’s a lot of trouble before they go out the door. But once you’re on the slopes with skis on and feeling the rush, you think that it was all worth it. And at the end of the day when you soak in an onsen, it makes winter worthwhile and memorable.

Major sources for this article: 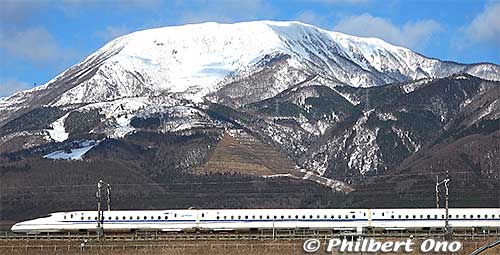