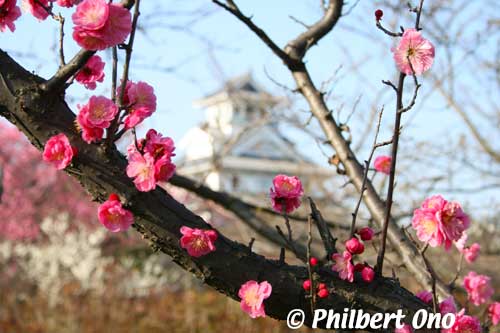 Plum blossoms, called ume (梅) in Japanese, have absolutely the sweetest and most pacifying fragrance of all the flowers in Japan. Whenever you see plum blossoms, put your nose right next to the flower and smell. It will sooth your soul. There are many varieties of plum blossoms, but they basically white, pink, or red and each color smells differently. The white ones have the most dainty smell, while the red ones have a stronger and more concentrated sweet smell.

Plum blossoms have been an intricate part of Japanese culture, art, and aesthetics for centuries. The term shochikubai (松竹梅), meaning pine, bamboo, and plum blossoms, is an auspicious and favorite aesthetic concept in Japan that you can find on folding screens, sliding fusuma doors, and Japanese paintings.

In most parts of Japan, plum blossoms bloom in Feb. and March. In Hokkaido, they bloom in May, at the same time as cherry blossoms. When they reach full bloom depends on how cold/warm the winter is. The colder it is, the later they bloom.

Nagahama Hokoen Park (also, “Ho Park”) 豊公園
Although Hokoen Park is most famous for cherry blossoms, it also has a decent number of plum trees. Great place to photograph them with Nagahama Castle in the background (photo above). They bloom in late Feb. to March. Near JR Nagahama Station. Google Map 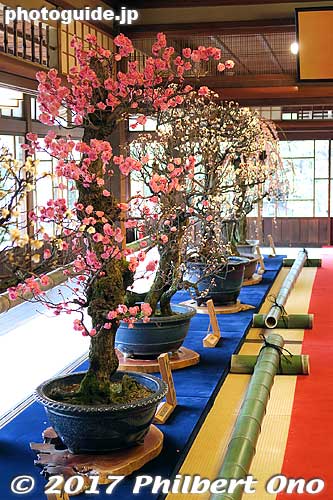 Nagahama Bonbaiten 長浜盆梅展, Until March 12, 2017. Hours: 9 am–5 pm
This is perhaps Shiga’s most famous plum blossom bonsai exhibition, held annually for 62 years since 1952. The venue is the stately Keiunkan (慶雲館), a Japanese-style former guesthouse originally built in 1887 to accommodate Emperor Meiji when he visited Nagahama. It’s near JR Nagahama Station. They have 90 bonsai trees on display, including one that is almost 3 meters tall or 400 years old. Don’t touch and try to smell these prized trees. Nagahama also has another bonbaiten in Azai. Admission: 500 yen (200 yen for high school and younger) Google Map

Kamo-no-sato Bonbaiten, Maibara 鴨の里盆梅展, Until March 10, 2017. Hours: 9 am–5 pm (enter by 4:30 pm)
Held in Green Park Santo (グリーンパーク山東), a large recreational park in Maibara. Inside the Spark Santo hall (すぱーく山東) are about 120 bonsai plum trees raised by over 30 devoted growers. They also have an orchid show at the same time. Near JR Omi-Nagaoka Station. Admission: 400 yen (200 yen for high school and younger, free for elementary schoolers) Google Map

Omi-Fuji Karyoku Koen Park (Omi-Fuji Green Acres), Yasu 近江富士花緑公園
Sandwiched between the foot of Mt. Mikami and Kibogaoka Bunka Park, Omi-Fuji Karyoku Koen Park (also called Omi-Fuji Green Acres) is about flowers and greenery, including plum and cherry blossoms. They have a blog showing the progress of their plum blossoms blooming. Buses from JR Yasu Station go to Kibogaoka Bunka Koen Park’s Kibogaoka Nishi Gate from which you can walk to the park. Hours: 9 am – 5 pm. Google Map 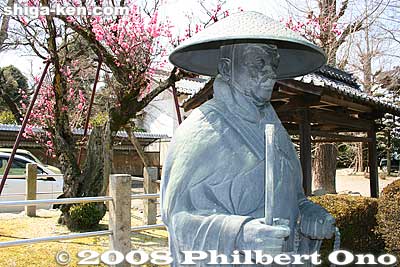 Statue of Saint Shinran in front of the plum tree he planted at Homanji temple in Echigawa, Aisho.

Homanji temple, Aisho 宝満寺
This temple in Echigawa has a historically significant plum tree in front of the Hondo main hall. While traveling, Saint Shinran, founder of the Jodo Shinshu Buddhist Sect, was unable to cross the Echigawa River due to flooding. So he stayed at this temple temporarily. During that time, he planted a plum tree which bloom red plum blossoms. Near Ohmi Railways Echigawa Station. Google Map 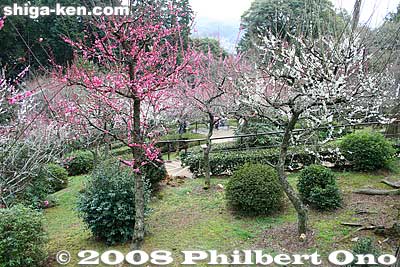 Ishiyama-dera, Otsu 石山寺
Ishiyama temple has an impressive 400 plum trees in three hillside plum groves. Since there is a variety of plums, there’s a good chance of seeing at least a few in full bloom in Feb. or March. They have a blog showing how much the plums are blooming. Ishiyama-dera also has an indoor plum tree ikebana (Mishogoryu School 未生御流) exhibition called Ume Tsukushi-ten (梅つくし展) until March 18, 2013 in one of their temple buildings called Myoo-in (明王院). This indoor exhibition is free if you have paid the temple admission fee. Near JR Ishiyama Station and Keihan Ishiyama-dera Station. Hours: 8:00 am – 4:30 pm (enter by 4 pm), Temple admission: 500 yen Google Map

Sakamoto Bonbaiten, Otsu 坂本盆梅展
I’ve never seen this, but it looks worthwhile. About 50 small and medium-size plum blossom bonsai trees are exhibited in the noted garden of Kyu-Chikurin-in (旧竹林院) in the temple town of Sakamoto. Near Sakamoto Station on the Keihan Ishiyama-Sakamoto Line. Peak period is from mid- to late Feb. Until March 3, 2013. Hours: 9 am – 5 pm (enter by 4:30 pm), Admission: 310 yen (150 yen for kids) Google Map