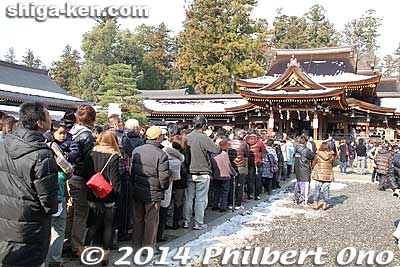 The Shiga Prefectural Police Department has estimated that 1.31 million people will pray at shrines and temples in Shiga during the first three days of 2012. This is more than New Year’s in 2011. Going to pray at a shrine or temple during New Year’s is called hatsumode (初詣).

Shiga’s most popular shrines during New Year’s and the estimated number of worshippers during the first three days of the 2012 have been announced as follows:

As usual, Taga Taisha will see the lion’s share of worshippers. No doubt, the shrine’s auspicious name is a major draw. “Taga” means many felicitations. Perfect for new year’s prayers.

And on New Year’s Eve, Buddhist temples will be ringing in the new year at around midnight. At Hikone Castle, there is the Time-Keeping Bell or Jiho-sho (時報鐘) which the public can ring from 11:30 pm. The bell is on the way to the tenshu castle tower. The castle gate will be open from 11 pm.