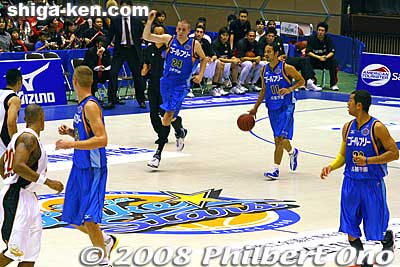 On Oct. 11, 2008, I went to see the pro debut game of the Shiga LakeStars pro basketball team in Otsu’s Shiga Prefectural Gymnasium (滋賀県立体育館). As you may know, the LakeStars is Shiga’s first professional sports team.

I enjoyed the game, and the fans were cheering loudly. But unfortunately, the LakeStars lost the game to Osaka by only 3 points, 78-81. They played Osaka again the next day, and lost again 73-89. Osaka is actually the strongest team in the bj league. They were the champions for four years in a row, since the start of the bj league.

I’m not a real basketball fan, but I plan to attend a LakeStars game whenever I can. I’m also very interested in the LakeStars because one of the players is from the University of Hawaii (my alma mater). He is Bobby Nash (No. 33). He’s a good player, and his father is the basketball coach at the University of Hawaii (UH). His father Bob Nash was a very famous basketball player for UH during 1970-1972. We called his team the “Fabulous Five.”
http://archives.starbulletin.com/1999/10/26/news/story8.html

We should all support the LakeStars by attending their games. See their game schedule at their official Web site:
http://www.lakestars.net/