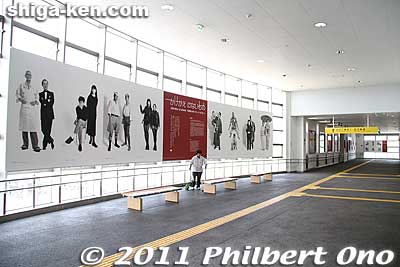 My friend Bruce Osborn, an American pro photographer based in Hayama, Kanagawa Prefecture, is now having a grand photo exhibition inside Maibara Station on the Tokaido/Hokuriku Lines in northern Shiga Prefecture. The theme is Oyako (parent and child 親子) portraits. The city of Maibara set up and opened the new Maibara Station Oyako Gallery (米原駅Oyakoギャラリー) on July 16, 2011, and Bruce’s 60+ oyako portraits are the first to be displayed. The exhibition is titled, Kakegae-no-nai-mono (Irreplaceable Things) (かけがえのないもの).

If you go out of the ticket wicket, you will immediately see his large portrait panels mounted on the large window in the main corridor. There are more portraits decorating the corridor toward the east exit. The portraits are all black and white and show one or two parents together with his or her child. Most of the portraits are of Japanese celebrities such as Kayama Yuzo and Yokoo Tadanori. They mainly come from Bruce’s longtime Oyako photo series published in the Mainichi Shimbun newspaper. Bruce has been shooting oyako portraits since 1982 and it’s his life work. He has been widely published and even has a few oyako books published. He has photographed over 3,000 oyako and even calls the fourth Sunday of July “Oyako Day” when he shoots oyako portraits assisted by his Japanese wife Yoshiko.

But the main interest for us in Shiga are the Oyako portraits of local people in Maibara shown in four large panels. The four panels represent the four seasons. Each seasonal panel has a number of portraits of ordinary Maibara folk posed as parent and child(ren) taken outdoors in Maibara. They all show a hometown background in Maibara. Bruce tells me that he went through an awful lot to make some of these portraits of 20 oyako in Maibara. For portraits in winter, he and his crew spent a freezing time in Oku-Ibuki, a ski ground. I thought he was crazy to lug heavy lighting equipment up snowy Mt. Ibuki in winter. It took him two years to complete the Maibara Oyako series during which he visited Maibara a few times in the four seasons.

I dropped by Maibara Station a few days before the opening on July 16, 2011 when he and his crew were setting up the exhibition on the corridor walls. He used giant inkjet printers to print out the photos and they had set up a wood shop inside the train station to make the wooden frames and panels. Took them a few days to finish the job. 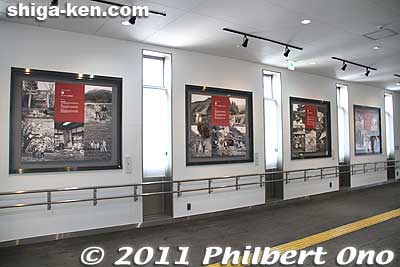 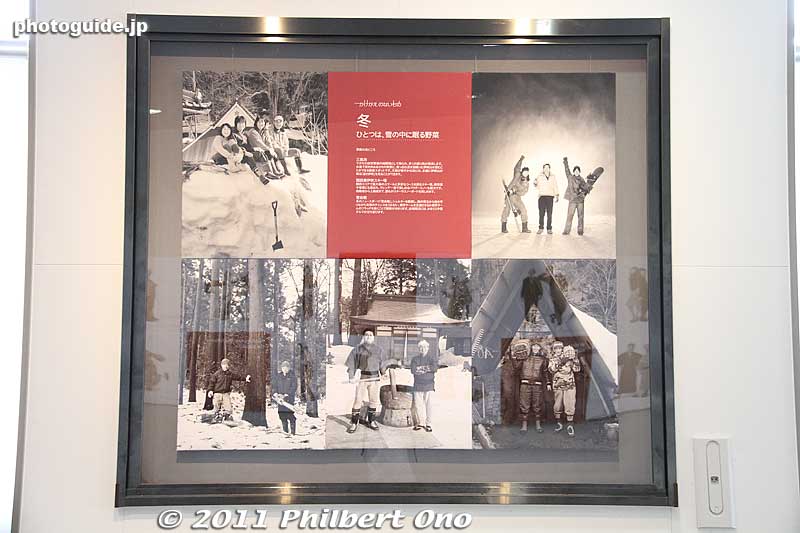 Another great thing is that the captions are in Japanese and English. And they include interesting quotes about child-rearing from the parent. The exhibition will run until March 31, 2012. You can see the exhibition while Maibara Station is open from early morning until late night when the last train leaves. Free admission, but  you have to give your train ticket and go outside the wicket to see the photos in the corridor. Too bad that most people transferring trains at Maibara Station won’t see the oyako portraits because of this. Thus, the portraits will be mainly seen by people who live and work near Maibara Station. I wish they also put a few portraits on the walls inside the station where we can see them when changing trains. Maibara Station certainly has lots of wall space everywhere.

Maibara Station has finally completed its major renovation and the large, new corridor connecting the west and east sides has remained empty and white these past few years. Finally, there is something nice decorating its walls. Initially, there were plans to have famous artist Hiro Yamagata, a Maibara native, to paint those huge white walls in a psychedelic motif. But it was apparently too expensive and it never happened. Bruce’s oyako portraits is a great alternative, a lot cheaper, and they fit in with Maibara’s current slogan of Kizuna (human bonds) and furusato (hometown).