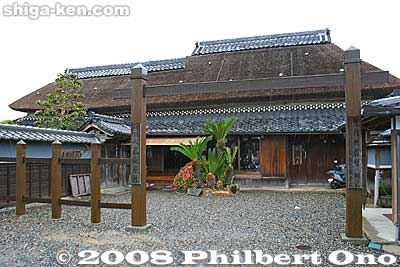 I finally visited the Koka Ninja House 甲賀流忍術屋敷 in Koka. I highly recommend taking your foreign friends here. Most foreigners are very interested in ninja. The Koga (Koka) ninja and Iga ninja are the two most famous ninja, but most foreigners do not know that Koga is in Shiga. We have to tell them it’s in Shiga.

The Koka Ninja House is unique because it is still in its original location. Other ninja houses in Japan (like in Iga-Ueno) were moved to the present location. Unfortunately, there’s no bus stop near the Ninja House. You have to go by car or taxi from Konan Station. Actor Harrison Ford visited this ninja house in 2000. Google Map

I also visited Tsuchiyama-juku. I have now visited all of the shukuba post towns in Shiga along the old Tokaido and Nakasendo Roads. Tsuchiyama still has the original Honjin. Google Map

I also saw the new JR Koka Station. I think it is one of Shiga’s best train stations (along with Nagahama and Notogawa Stations). It has huge murals of ninja.
https://photoguide.jp/pix/thumbnails.php?album=688

Koka has so many things, it will take me some time to see everything.